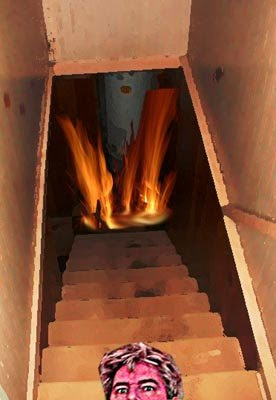 Mickey suggested my dream of walking down an ancient, worn staircase the other night was a descent into hell. Since on occasion, Mickey is JC Superstar and goes walkabout with dingos and such, I take his dream interpretation pretty seriously.

This is not to say that I want to take Mickey's advice and go to hell. As Sartre said, I think Hell is really other people. I also think Hell is a relative term, so I suppose if I followed the stairway in my dream I'd probably end up at a family reunion.

Fortunately the stairs haven't reappeared in my dreams. And if they do, I am pretty sure that, although they may lead to the underworld, they were modelled after some of the scary basement stairs I've seen in my life and stored in my middle aged brain (starting with the scary ass stairs in my grandmother's house that led to her scary ass basement).

But thinking about a Stairway to Hell instead of a Stairway to Heaven raises a few questions: if Hell is underground, shouldn't it be cold and Heaven hot since hot air rises? And isn't it easier to walk downstairs than upstairs?

Perhaps this is why I have nightmares.
Posted by Time at 9:12 PM

Darling Tim Id … perhaps if you supplant the physical laws with metaphysical laws it will make a bit more sense. Metaphors are a big help too.

I happen to think heaven & hell are simply metaphors for spiritual enlightenment … a continuum, if you will. (Although, family reunions being analogous to hell, well that’s brilliant!)

However, back to the metaphor & continuum … so if heaven represents higher progress on the spiritual continuum … then it makes perfect sense that it will be a harder, hotter uphill climb. The whole no pain, no gain gig … think JC … (right, Mickey?)

AC/DC said it all in "Highway to Hell". Take any asphalt ribbon any day and chances are that's where you'll end up.

Jane poe, That's a very Calvinistic view of it. I prefer the more Existential approach and subscribe to the philosophy that we create our own heaven and hell and carry them around with us (preferably not in a fanny pack).

THE Michael,
AC/DC? Please...Can we quote Pink Floyd instead?

So hell is two lost souls swimming in a fish bowl year after year?

I have never understanded why fire was associated with hell. New life and beauty always rise from the ashes of fire so after you're burned to a crisp, do they send you back to earth, smarter, prettier, funnier?

You seem to be stuck at the top of the stairs. I was stuck at one point in my journey as well and was comforted by my anima and we all know I dug that. Anyway, perhaps you simply need to connect with your anima. Chances are you have projected her all over Tess so I suggest building an altar, having a nice dinner with your lovely wife and before you know it you won’t be thinking about stairs.

By the way, if your family is anything like mine when you do finally confront the hell that is the staircase I have complete confidence you will find your family is at the bottom of your entire mess.

Perceived Reality, Very good point, especially if you subscribe to cremation as a more viable way to dispose of mortal remains than pumping them full of chemicals and burying them in the ground. The Pheonix Rising from the Ashes is a symbol of rebirth, so perhaps hell is actually heaven.

Mickey, I was hoping you would weigh in on this. I have never built an altar, but I did build an Elvis shrine once. It was the one my dearly departed cat Cuervo used to pee on when he was pissed (which was quite often). The shrine did not survive the move to the new house. Regardless, you have confirmed my theory of hell being a relative. Thank you.