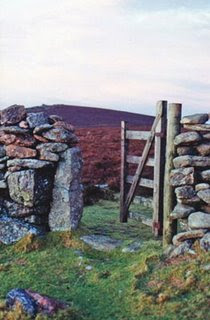 "True artists and true physicists know that nonsense is only that which, viewed from our present point of view, is unintelligible. Non-sense is nonsense only when we have not yet found that point of view from which it makes sense."

Gary Zukav, The Dancing Wu Li Masters – An Overview of the New Physics
Looking at this photo, do you see a gate opening, or a gate closing? Go ahead, take your time. I'll wait.

WRONG. This isn't a value judgement test about "half full" or "half empty."

The gate is neither opening nor closing. It is sitting there, statically open. There is no motion. I know this for a fact. I took the photo. It was on the moors in Dartmoor in England. A little voice in my head kept saying, "Stay on the path." There was a full moon. A shot rang out. A woman screamed.

Faced with a multiple choice question with limited options, more often than not we feel obligated to choose one of the options presented. It rarely occurs to us that the answers presented to us aren't necessarily the right ones or the only ones. But as with most things in society, knowledge has become standardized.

The irony of standardized tests is that they can also be used to teach you to watch for trick questions. Teachers have been doing it for years to teach students many lessons...more often than not humiliation. Who hasn't been given that test that begins with "Read the entire test and instructions before beginning." You of course ignore it and frantically fill in all of the answers before you get to the last instruction which tells you not to fill in anything but your name and hand in the test.

I fell for that one once. But then I became paranoid and began overthinking every test. I became obsessed with proving my ability to think "outside the box" that I couldn't manage what was inside the box.

It is not just a matter of thinking "outside the box." It is more of a matter of simply thinking, period. Too often, we confuse brain dumps with creativity. Most real artists have studied composition, form, color and know the rules before they think of ways to break them. The same is true for other areas of knowledge. Even creativity requires some structure. It just may not be apparent.

You probably won't believe this, but I was thinking that the gate was ajar.

If the gate was a jar, it would have a lid.

I crack myself up.

I assumed that the gate was broken and was unable to open or close any further.

Shandi,
If you were a surrealist, you would have said the gate was a fish.

Tim - you're just fishing for more comments. I'm a realist.

You are a god.

Where do I send my membership fee?

Mickey,
Just knowing that I have brighten up your day is membership fee enough for me.

Actually, Tess was getting on your back about cleaning up your desk, and, true to masculine problem solving, you wrote a deep and insightful thesis on chaos theory as applied to gates and desks, hoping that once she read it she would understand the zen behind desk organization as practiced by blog masters. Unfortunately, my son, it isn't going to work on her any better than it would have worked on MY wife.
Nice try though. Award yourself one beer. Then shuffle some paper and hope she thought you made a half-assed effort.

HA! WRONG! My desk at home is remarkably clean. It's my desk at work that you couldn't find with a compass. Try again Goat Master Michael.

This is not a gate (or a fish). It is a jpg file transferred from a scanned photograph. An excellent photograph I might add.

Yes, Shandi, and a shameless way for me to foist my photos on the world, too. But at least my face isn't in the photo.