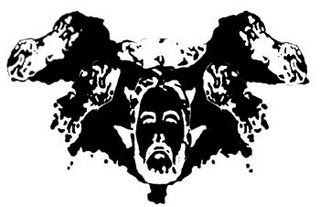 "I pointed out to you the stars (the moon) and all you saw was the tip of my finger."
--African proverb

Fortunately I have never had to take a Rorshach inkblot test. Who knows what the psych's would read into my responses. Personally, I think it is a pretty odd way to determine whether or not all of a person's dogs are barking or not. I don't know about you, but I can generally size up a person when I meet them and can tell you if they are a candidate for shock therapy without making them describe what they see in a blob of ink.

I wouldn't want to take an ink blot test for another reason. I'm one of those people that freaks if they take a test and don't get the right answer. I could see myself staring at one of the ink spots for hours, afraid to say what I think it is for fear I'd call it a bat when most people think it is a crow.

I think it is human nature, however, to look for hidden meaning in things. It is why people tend to miss the obvious. It is also why e-mail is fraught with misunderstanding. It is too easy to read things into it that weren't intended.

Besides, people are always seeing things that weren't intended when they look at photos or read stuff you've written. I was just watching a thing on television the other night about the official portrait of former President Bill Clinton. People were up in arms because Clinton wasn't wearing his wedding ring in the painting. What did it mean? Had he secretly divorced? Was he fooling around? Did Hilary leave him?

The artist confessed he just overlooked the ring when he was doing the portrait. Not everything has significance....

I love the bit about the ring, it's so classic!

Do you think those waving lines could simply mean my cable connection blows?

I think perhaps there may be significance in the Clinton portrait only we often tend to be diverted by our own stuff. I would venture to guess that if Freud were about he’d love a sit down with that artist to discuss the apparent slip.

Awesome post by the way. I’m finding significance all over this blog.

Hayden,
I'm sure Hillary did, too!

Mickey,
I had an "Ink"ling that you would get the hidden messages I've placed throughout this post.

PS: Wearing aluminum foil on your head does help.

It could have been worse.....he could have painted his zipper down......

I stared long and hard at that ink blot and couldn't see a darn thing. Don't you usually photoshop your face into everything you post?

I took an IQ test in high school and the teacher proclaimed me to be rather brilliant, which instantly destroyed any credibility I had in IQ tests. In retrospect, tho, I think the test was right; I am brilliant, if brilliance can be measured in any area other than genuine success.

THE Michael,
Do I Photoship my face on something in every post or do people just see my face on everything I post? You are the genius. You tell me?

Eh, don't worry about the ink blot test Uncle. I took one once and the p-doc said "you're clearly quite depressed. You're also really creative." Huh.

R. I can only imagine what you told him you saw in the ink blots. Perhaps a piece of pumpkin pie with whipped cream on one of them?

It WAS Micky, wasn't it? Anyway, I went over to Kristy's and set her straight. I think. I hope.

Tim, she likes the Monkeys.

I see the bottom of four shoes (two on each side) with Tim Id's face in the middle.

What does that make me?

What's that, the Michael? Pink Floyd sucks too? Well, I don't know if I'd go that far. True, they're no Bay City Rollers, but only so many groups can represent the pinnacle at one time.

So how's the rash--they one you got from the flying monkey suit Tim forced you too wear? Not too itchy, I hope.

JanePoe, I'd say you have a de-FEETest attitude :) And look a little closer at those feet.

Kristy, Don't be hating. THE Michael acted alone. He's had some issues with an injured wife, snakes and his fainting goats. But let's not drag Pink Floyd into this.

That's very interesting Mickey. Let's go with that. How does it make you feel?

I can not imagine doing an inkblot test because I always seem to dance to a different drummer, grinz! They may put me right away, calling the guys in the white coats as I am answering each ink blot.