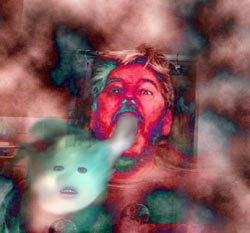 I tell you I can have some freaky ass dreams at times. It's as if Stephen King is tapping out one of his nastier plot lines in my head. I mean, we are talking endless streams of zombies and killer gargoyles that I am dowsing with gasoline from a flying boat. And amidst all of this, I am trying to find my cat.

Maybe it is because Tess is taking one of our cats to the vet today to get her teeth cleaned. It freaks me out because they have to put cats out to clean their teeth. Not that I blame them. Since cats have anger issues at the difficulty in communicating with people, they tend to act out.

But still, my dreams were pretty wild. I wish I could write them down, but they are in such great detail that it is hard to capture them all. Besides I am kept pretty much occupied killing the undead to stop and take notes.

Though I did have this great imagery of walking down this ancient stairway. I remember thinking how symbolic it was that I was walking on the sides of the steps because they were less worn than the center of the steps. Even in my dreams I was travelling the path less traveled.

I really am not trying to read anything into my nightmares. I am too old to believe in anything but self-fulfilling prophecies, especially when it comes to dreams. Though the zombies I am fighting in my sleep could be some projects I have at work that never seem to die.

And Tess has e-mailed me that Bailey, our cat, has recovered from her teeth cleaning and is waking up as I write. They didn't have to pull any of her teeth (which is a relief to both Bailey and I). Barring any complications, she should be home tonight and, although I may still be attempting to kill zombies in my sleep, I hopefully won't have to worry about my cat at the same time.

So maybe I will have time to jot down some notes during my dreams tonight.
Posted by Time at 12:58 PM

But you have to be careful that you are actually jotting down the notes not just dreaming that you are taking notes.

In fact, it would be most efficient to just dream that you are being accompanied by a stenographer on your zombie slaying jaunts. It'd save lots of time.

Plus, if things started to go bad you could just throw the stenographer in front of the zombies and make your escape while they feasted.

Of course then you wouldn't have any notes. But it's better than getting eaten by zombies.

Have you ever noticed how frigging annoying squirrels can be?

Leather Squirrel,
Interesting point of view. I've considered the stenographer , but I think one would cost an arm and a leg.

PS: They have drugs that help keep alter egos at bay.

So Tim, have you been taking your alter ego suppressant drugs lately? Haven't seen hide nor hair of a certain monkey in a while.

I strongly encourage you to continue documenting your dreams. I find the whole thing fascinating.

darn it! I forgot to tell you how much I enjoyed the artwork.

Shandi,
Sometimes the monkey gets tired of dancing.

And I'm pleased you like the artwork. I know you appreciate the disturbing stuff. :)

“Though I did have this great imagery of walking down this ancient stairway.”

Good God! You’ve gone into the underworld man! The best thing to do is just ride this whole shamanic initiatory thing out. Let the zombies eat your brain (representing the dismemberment of the future shaman) and JC or the like will come along and shove a new one in. You will then be taken to the upper realm where you will eat grapes or since you have the Elvis thing going on perhaps they’ll throw in a buffet. You will then come back to this realm and bring your newly found knowledge with you. Have a nice breakfast and some quiet time with your cat while Tess sews you a medicine bag. Later you should review artwork by The Michael’s Wiccan wife. When you begin to see the hidden alchemical symbolism reveal itself you are at least ready to woogey, woogey a bad case of diarrhea on any pain in the ass coworker.

Mickey, I consider you the expert on these kinds of things and the thought of woogey woogeying a bad case of diarrhea on some co-workers sounds pretty cool. But isn't there some kind of online course I can take instead. These zombies eating my brain dreams are kind of intense. On the other hand the Elvis style buffet in the upper realms sounds like a hoot, especially if the King is there. It wouldn't help my whole diet thing though. I'm feeling conflicted here.

Sometimes the comments are as entertaining as he original piece. So, Tim, is this some underhanded, sneaky introduction of Tess into the Photoshop world of Tim-id? Has she noticed and is she appreciative of the fact that you are throwing her up, symbolically? Will she be reading this and having been made aware of being "outed", arrange to have you put to sleep and your teeth dyed flourescent orange? Is tommorrows episode going to be a killer? hehe

Actually Tess has appeared in several images in the past, but not this one. Both images are me. They were after all, my nightmares.

Bailey? Cuervo? Am I detecting a theme here?

You should put a little tape recorder by your bed as soon as you wake up make some verbal notes before you forget it.

Cherish, I'm afraid all you would hear are screams :)