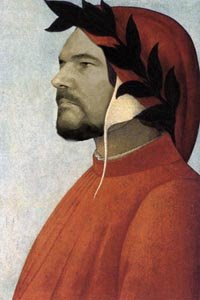 When I had journeyed half of our life's way,
I found myself within a shadowed forest,
for I had lost the path that does not stray.
--Dante, The Comedy

I've read Dante. He wasn't very funny. But he wrote in Italian so something may have been lost in translation. Translations are like that. Idioms for example, fall very flat in some languages.

Oh, I know that Dante's Divine Comedy wasn't supposed to be funny. It was called a comedy because, at the time, that referred to literature written about common subjects in the venacular as opposed to more serious subjects (tragedies) written in Latin.

Not that most of you care. But you would if you picked up a copy of the Divine Comedy and expected Dave Barry. Most of it is just allegorical poetry about heaven, purgatory and HELL written in three sections that are each 33 cantos long. Dante liked the number 3. His HELL had 9 circles (3 x 3=9).

There are no apples in Dante's hell. In fact, the Bible doesn't really call out the apple as the fruit from the tree of knowledge of good and evil. The apple was a symbol of desire in Greek mythology. So the serpent didn't tempt Eve with an apple. It's all BS!

Now that is comedy! 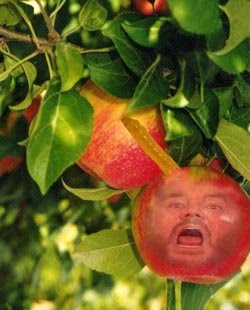 I consider most anything written by mortals concerning afterlife to be comedy. What gets me is how centuries after the fact, in the time it took mankind to develope lanquage and finally the written word, suddenly someone comes up with Genesis, as though they were there. That would be like Peter Jennings reporting from the front lines of Waterloo. Hell, nothing was even mentioned concerning JC till something like forty years after his death. What, they had better things to do all that time then get around to mentioning that a savior had been born, was crucified, and rose bodily to heaven? I can see it now....."Paul, we need a new religion, any ideas?" "Well, there WAS this dude awhile back........"

THE Michael,
The DaVinci Code talks a great deal about that. Much of the modern Bible was put together by a committee under a Roman Emperor who picked the Gospels that jived with the history that supported what he wanted people to believe. Reality is what we want it to be.

It is? Damn, then starting right now, I live in a opulent log cabin right smack dab in the middle of a large national forest...........

So, I see you are circling (get it? Circling? As in Circles of Hell? Never mind) ever closing to talking about Purgatory after all. The lighting there--it's as merciless as in the dressing rooms at The Bon. Or Macy's. Or whatever they're calling it these days (they still have Frangos, don't they?).

Kristy, I feel as though you are better equipped to talk about Kent or Auburn or whatever they are calling it today. Or perhaps the Supermall is Purgatory. And yes they have Frangos at Macys. But they are all melted.