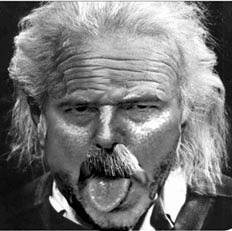 Okay, my theory is that you are only as obnoxious as people perceive you in relation to how obnoxious you perceive other people or O=O2xOCUOP. It's kind of a Karma thing.

Case and point, we were at a barbecue yesterday. It was primarily younger co-workers and some of the barbecue host's neighbors. On an obnoxious scale of 1 to 10, 1 being catotonic and 10 being a major asshole, I was probably a 5 or 6. I was more or less just being a relatively controlled version of myself -- witty with a dash or two of jerk (there is a fine line between the two).

I will be the first person to admit that I am pretty hypercritical when it comes to judging human behavior in social situations. I react negatively to loud, inane chatter, mindless small talk or idle gossip (unless it is juicy). I react positively to witty banter, stimulating discussions and good natured teasing. But at times it is difficult to be totally objective about what should require a positive or negative reaction. Because it is all relative.

Okay, here is where my theory gets complicated. I'll be chatting away at a party, feeling good, slipping in a few sharp barbs here and there, but in a pleasantly obtuse way. And then I experience an out of body experience and temporarily begin seeing myself the way others see me or the way I would see me if I was observing me. Then it is like my obnoxious meter goes off the scale and I think everyone in the room is whispering about this horse's ass who just zapped his wife with the battery powered mosquito zapper wand (it was an accident) and I know beyond a doubt that I am the horse's ass.

I know it just sounds like guilt induced paranoia inspired by my own inability to keep my mouth shut, but I honestly feel as though I am being pretty darned entertaining until this feeling comes over me. And then I am mortified that I am being perceived the way I perceived middle aged guys at parties when I was younger and that Karma is now screaming, "Nyuk, nyuk, nyuk" and poking me in the eye in front of all of these people.

For the record, I have never worn a lamp shade on my head, started a conga line or suggested everyone shotgun their beers. I have suggested that I feel like changing into my Speedo and black socks and go wading in the kiddie pool at 11 p.m. This has nothing to do with alcohol consumption. The stuff just comes out of my mouth sometimes before it registers with me whether I would consider that an obnoxious thing coming out of someone else's mouth.

I suppose the solution is to simply not accept invitations to parties. I'm never overly comfortable at them anyway. Perhaps this is why I say stupid things. Or maybe it is just something that happens to you when you hit middle age. Maybe things will be better when I'm simply old aged. Then people will just think I'm senile.

It's all just my theory anyway.
Posted by Time at 2:42 PM

Did Tess make you write this?

Same here, guy, me with the pissed-off look on my face and a voice that translates into "yelling" when it strikes an eardrum other than my own.

Perhaps we have at least one saving grace in that we are not totally oblivious to our percieved faults, and at least contemplate controlling them, even if we are rarely successful. Having read this, at least I'd know to put my hand on your shoulder and tell you, "it's all relative, dude..." And I think I could trust you to do the same.

Nah, THE Michael, Tess didn't put me up to it. No one actually said anything. But I'm glad to know if we both end up at the same party, we'll have each other's backs. Thanks.

Everybody is doing that all the time. Just keep in mind that other people are so wrapped up inwardly criticizing their own behavior they probably haven't even noticed any of the things you are worried about.

Except zapping your wife, of course. Nobody is so busy analyzing themselves that they'd miss something like that.

Oh yeah, the speedo and kiddie pool thing. People would notice that as well.

Lights, I knew you'd understand. But the bug zapper thing could have happened to anyone. She kept saying "get it, get it, it's right in front of me." I swung the thing at the same time she was flaying her hands. There were a few sparks, she flopped around a bit...I'm not even sure anyone noticed. Tess can't even remember it.

PS. For a man my age, I look pretty damned good in a Speedo and black socks.

humm... stuck on "the speed of light in a vacuum." I recently got a Dyson and it's clear plastic, you can see right in there, all the dirt whirling around in little tornados. How does clear plastic affect the speed of the light inside? Does it go faster?

I'm with lights - except for the zapper and the kiddie pool routine, I'm betting no one noticed. If they did, they were probably glad you were attracting attention and thinking "there but for the grace of god..." (or bob, or Innana, or whatever...)

Thanks Hayden, I almost got sucked into the vacuum digression myself, but I took the high road and went straight for the bug zapper. Timing is everything.

You seem to be implying that you weren't prone to cantankerous, peevish, unsavory but cleverly acerbic behavior BEFORE middle age. (And before you start in on me, yes, I just realized each of those words essentially mean the same thing.)

Step back a little and you'll realize that your friends know how solid you truely are and that a good many of those accusing you of being too harsh in your behavior are the same who think nothing of vicious backbiting behind closed doors.

What would you rather be known as?

I ride the bus,
Nice adjectives. I don't know too many people who could actually use them in a sentence. I would like to be known as a man who was kind to animals and enjoyed "Deadwood." Thanks

Well I think you would be most entertaining at a party and I would never think you were a horse's ass. I think it is that coming of age when we realize we are getting older and how we perceived people our age when we were younger. I find myself amazed at how young the kid working at McDonald's looks, the fear of teenage drivers when they whiz pass me and look like they should still be riding skateboards, or the young person just out of college that is now teaching my child and I could be their mother SHUDDERS!!! You just do not have the luxury of having children who love to tell you how old you are on a daily basis when they say stuff like in the "old days" when you were young or you are ALMOST 40 wow that is old. But I do believe you would be an absolute blast at parties and I would most definitely try to sit by you to listen to your jokes and stories.

Thanks Cherish! But I'm not sure you would want to sit next to me if I had a bug zapper in my hand :)