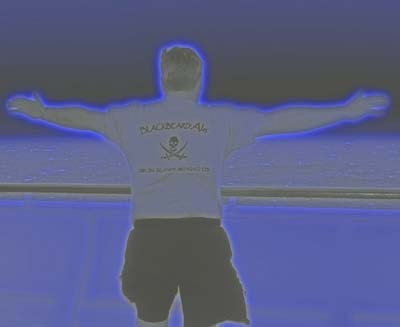 It's a hot time in Seattle, I tell you. The thermometer is pushing into the 90s. And the people of the Pacific Northwest are not people who deal well with temperatures above 65 degrees. Shoot normally the only people who wear shorts here are the ones who work for Amazon.com (they are the same ones who can't accept that ponytails were never a particularly good look on a man). But let the temperature rise a bit here and everyone turns into Jimmy Buffet and starts dressing like we live in the tropics.

And I know it is trite to talk about the weather. But it's not like I'm running around shouting at people, "Is it hot enough for you?" I'm just trying to share with you a little bit of what is going on in my little corner of the world. So back off, okay?

Sorry, but I mainly mention the heat because it made it difficult for me to sleep last night. My bedroom is upstairs and I've been too lazy to put the air conditioner back in the window. It is sitting on my bedroom floor where I placed it when I took it out of the window last fall. This is one of my quirks. I tend to leave a lot of things exactly where they lay until I get sick of tripping over them. I imagine Tess will break me of this habit. Or I will break a leg and be a bit more aware of my surroundings.

But I am a Pisces and Pisces tend to have their head in the clouds a great deal of the time anyway. Einstein was a Pisces and most of us have heard the stories about how he could be very forgetful. For example, I've heard he would sometimes forget to go to the bathroom and just drop a load in his pants. So I guess geniuses and some of the people who use public transit have something in common.

Not that I think I am a genius. But I do tend to make it to the bathroom more often than not. Which is another bummer about having an upstairs bedroom and a downstair bathroom. Sometimes it is quite the challenge at 3 a.m. to maneuver in the dark past the air conditioner sitting on the floor to the stairs, avoid stepping on the cat who likes to sleep next to the heat vent built into the stairs (unless it is hot and then she likes to sleep on my head) and make it to the bathroom.

Our next house will have a bathroom on the same floor as the bedroom. I'm not getting any younger.

Though when I was a boy, I thought it would be cool to live in a house that had an upstairs. The house I grew up in had the main floor and a partial basement. Eventually my mom turned the basement into a bedroom for my two older brothers. The basement originally had an outside entrance, so it was kind of like giving them their own apartment. But it didn't have a bathroom. Eventually I got the basement when they moved out. Then I had to deal with the hundred yard dash upstairs through the cold to the toilet. Then mom added on to the house with the money she got from selling my grandmother's house for a stinking $6,000. The addition included making the entrance to the basement inside. Still there were stairs.

So this deal with having to navigate stairs to make it to the bathroom has pretty much been an issue for my most of my life. Even when I was in college and lived in the dorm, I was in the room farthest from the men's room. But I had a sink and a window, so there were late night options.

Did I mention it is hot in Seattle today?

Tim, I just dropped by for a sec to tell you that you inspired me...I went out and bought "Photoshop". Then, I saw your new design. Wow!!!! It looks awesome. I also noticed the new blogroll. Excellent. Thanks for linking to me. I'm a loyal fan...so you really have no choice. A lot is going on right now so I haven't much time...I'll be back to read your last two posts soon.

Okay...I'm back. I had to post my cinema meme for Jim.
This was funny. I could picture you fumbling around in the dark trying to make it to the bathroom. Very descriptive.
BTW: it's already over 100 here in Bakersfield...and will soon be over 110. At least you get the ocassional rain storm to cool things off.

A few weeks ago it was snowing in this part of the country. Now we're having 2 days rain then a day of sun. It's very fine disc golfing weather and I'm taking full advantage - work and wife permitting.

I remember what you look like when you have sunburn and are peeling from your neck, shoulders and arms. You were smiling so I guess you weren't in too much pain.

Mrs. R has a tendency to leave things laying around too. At least she's not a ninja; then she would be leaving her caltrops everywhere. Owie.

Well good for you Shandi! If I can crank out interesting if not too professional photos, imagine what your artist's eye can create.

Happy to provide the link. But remember someone actually has to visit here first to use it :).

When did you take up golf.

I've been disc golfing about a year now. There are public courses all over the place and they don't cost a cent to play. The people are mostly laid back and it's all about having fun. I'm not very good yet but I really love to throw. On occasion I manage to miss the trees and hit the basket.

I'm greatly relieved that you aren't trying to follow in Tiger Woods' footsteps. I don't think I could deal with someone in the family actually golfing at some course that didn't have a windmill as one of the holes. Disc golfing seems more appropriate for you.