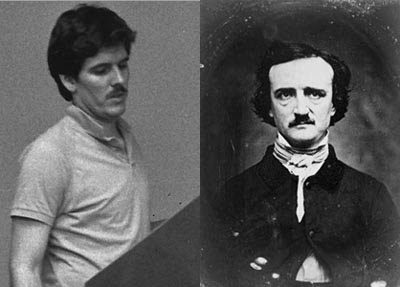 When I was a kid, I was fascinated by Edgar Allan Poe (I was always a morbid little cuss). I read all of his short stories and many of his poems. I particularly liked The Raven:

Once upon a midnight dreary, while I pondered weak and weary,
Over many a quaint and curious volume of forgotten lore,
While I nodded, nearly napping, suddenly there came a tapping,
As of some one gently rapping, rapping at my chamber door.
`'Tis some visitor,' I muttered, `tapping at my chamber door -
Only this, and nothing more.'

Maybe it's because my mother used to tell me a story about her older sister trying to memorize the poem for school. My aunt was trying to rehearse the poem in private (no small feat in a family of 13 kids). Every time she came to the part about "rapping" and "tapping," my mother and one of her siblings would rap on the window outside the room my aunt was rehearsing in. Then they'd run away before my aunt, chasing after them reciting words that would have made Mr. Poe blush, could catch them. When she gave up and went back to memorizing the poem, my mom and her sibling would scurry back to rap on the window again.

Not much of a story, but it stuck with me all of these years.

And so has the lyrical stanzas of the Raven.
But what really made me think of Edgar Allan Poe was this strong belief I had growing up that I was Edgar Allan Poe (I told you I was a morbid little cuss). I'd check out books about his life and sit and stare at his portrait and I convinced myself I'd been him in a past life.

"The boundaries which divide Life from Death are at best shadowy and vague. Who shall say where the one ends and where the other begins?" (from The Premature Burial, 1844)

And once you hear of all the evidence, I'm sure you'll agree.
For example, Edgar Allan Poe was born on Thursday, January 19, 1809 in Boston, Massachusetts and died on October 7, 1849 in a gutter in Baltimore, Maryland. I was born on Tuesday, March 18, 19** in Boise, Idaho and I haven't died yet and I don't plan to die in a gutter (you learn a few things from your past lives).
So, we were both born in cities that begin with a "B" and I've been to Boston once. Uncanny, huh?

Edgar Allan Poe married his cousin. I grew up in Idaho where many cousins married. All of my cousins pretty much looked like the south end of a northbound horse, so I never thought of them romantically. Besides, as I pointed out about dying in a gutter, when you are reincarnated, you hopefully learn from mistakes made in a former life.

So, by sharing this concrete evidence that I am EAP reborn, I hope that I have shaken the very foundations of whatever belief systems you've pitched your tent on. And in closing, I'll leave you with the final verse of the famous poem I wrote as Edgar Allan Poe:

And the raven, never flitting, still is sitting, still is sitting
On the pallid bust of Pallas just above my chamber door;
And his eyes have all the seeming of a demon's that is dreaming,
And the lamp-light o'er him streaming throws his shadow on the floor;
And my soul from out that shadow that lies floating on the floor
Shall be lifted - nevermore!

Couldn't have said it any better myself (even though I did)...well, maybe if I wrote it today, I'd change the bust of Pallas to one of those little lawn jockys to give it more of a homey touch. You can't be reborn with evolving a little.
Posted by Time at 11:16 AM

I'm convinced. But I don't know that convincing me is all that noteworthy since I also choose to believe Paul McCartney died in 1967. (It's more fun that way).

Goo, goo, ka choo. I buried Paul! Wasn't it more like 1969? What year was Sargeant Pepper's released? And there was the whole Abby Road thing. Ironic that Paul McCartney was the one Beatle that actually lived this long. You realize that most people don't have a clue as to what we are talking about.

I know it's ancient myth but I figured you'd get it. Sgt. Peppers was '67, Abbey Road '69. And Ringo's still kicking, unless I missed something. A local radio station played an hour long special on the clues that were supposedly on the albums. I taped it and tried to find them all myself. The clues were pretty far fetched which is why your evidence for being EAP reminded me of it.

I always thought that Poe was reincarnated as Mr. Willy Wonka:

"Not a speck of light is showing...
so the danger must be growing...
is the grissley reaper rowing?"

btw: My 6th grade teacher exposed us to "The Raven" and recited it with the perfect combination of mystery and suspense. Thus began my current addiction to horror and suspense.

Lights in the Wake,

I never knew Ringo was alive. You couldn't tell from his drumming. I was thinking about Pete Best (I think he was the original drummer).

I remember having the discussion with my grade school buddies in 5th grade about whether Paul was really dead. We were all pretty hardcore Beatles fans.

What do you mean my EAP evidence was far fetched?

Stop listening to that Heavy Metal music and go buy yourself a Beatle's CD.

Funny about the Willy Wonka quote. Appropriate that Johnny Depp will be playing him in the remake.

Kudos to your Sixth Grade teacher. As you pointed out before, there's nothing like supernatural fears to take our minds off the real boogeymen amongst us.

True story here: My mom had a choice to worship the Beatles or The King. Of course she chose Elvis.... but when she went on her honeymoon, her sisters exchanged all of her Elvis records for The Beatles. So my mother was still bitter about the whole thing when I came along. She managed to restock her Elvis collection, but never purchased one from The Beatles. So..... I was denied access.
Tragic really. But, I will attempt to aquaint myself.

That's a funny story about your mom and her Elvis records. But even Elvis felt threatened by the Beatles.

John Lennon is supposed to have said, "Before Elvis, there was nothing." Of course, he also said, "Elvis died when he went into the army."

Elvis entered the army the year I was born. It was the Beatles who were at the forefront of music when I was growing up. Elvis was this guy making bad movies.

But regardless, the Beatles last album (Let it Be) was released in 1970. That would probably correspond to the year you were born. So, I guess you can be forgiven for not being a Beatles fan. Let's just be grateful you didn't become a disco fan.