Something wicked this way falls... 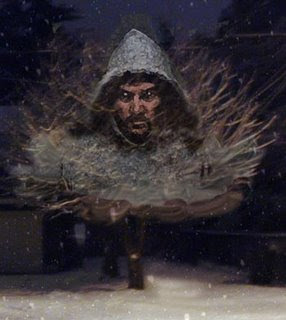 It is snowing here in the Puget Sound. So while of my neighbors look outside and see the beauty of the white stuff, I see something a little more sinister slithering down from the sky.

If I were a kid, I'd be excited and scraping together a snow man, hoping school would be closed in the morning. But since I am an adult that has to get to work in the morning in a region that flounders at the sight of a snow flake, I'm annoyed at best.

When I was a kid growing up in Idaho, snow didn't really shut down anything. It never shut down the school. It didn't shut down the roads. It was just there.

The people of the Puget Sound are not emotionally equipped for snow. It rarely happens here. They are oblivious to the rain for the most part. When becomes cold and frozen and comes down in flakes, they stare at it like a chipanzee that's been handed an iPod. Then they do the natural thing. They jump in their cars and try to drive as if nothing was amiss. And idiots in SUVs -- the official vehicle of the Pacific Northwest -- somehow think four-wheel drive allows them to navigate at 60 miles per hour in the snow with immunity.

Inevitably they clog the roads with abandoned cars that have skidded off the road because the concept of steering your car in the direction the rear end of your car is skidding does not come intuitively to "native" Washitonians. And for the most part, it does not come naturally to people who have moved here, either. Knowing how to drive in snow doesn't really help you when no one around you does.

Part of the problem in the greater Seattle area is that everything is built on hills. So pretty much anywhere you try to get to driving involves going up or down a hill. The best course of action is to stay home or take public transit. Unfortunately, most employers here don't believe in snow days and our bus drivers don't really know how to drive in snow either.

So as the snow falls and the lights flicker, I shudder a bit. It's going to be a long night. And the morning commute promises to be even longer.
Posted by Time at 8:40 PM

When I first moved here to Jacksonville from Anchorage, it's like I brought my own weather with me, for that year it did something it don't do down here...it snowed. The world as they knew it ended that day....hehe.

I was driving my 4X Jeep Cherokee at 35mph around Flustered Floridians driving at 5, and watching in amusement as cars floated thru intersections and into each other due to their mistaken belief that you can actually stop a car on ice AT the stop light. I got to work on time that morning only to be told to go back home because only me and the other two hearty souls had even attempted to make it in. I DID get a little "show-up" pay.

Those of us who live with snow know you can't just turn off life due to a natural phenomenon; you learn how to maneuver thru it.

the news reported last night that, once the shopping day wound down, people loaded into their cars as if we weren't having a big first rain and started running into each other.

A stupifing 90 accidents reported - in an area that doesn't count anything that isn't big enough to require
A) an ambulance
B) a police presence to haul your ass out of the traffic jam you've created.

Kristy, As a matter of fact, I did. No snow day for me.

THE Michael, Snow happens is right. But snow in Florida just ain't right.

Hey there Tim,
Sorry to hear of the yukkie snow. Wish you could stay home and have some fun indoors. I don't mind driving in the snow, but the ice, now thats another story. That i won't talk about since we are expected to have ice on Wednesday. Also glad you had a good Thanksgiving, aside from the silly looking lil car. ;) Have a good week.
Hugs,
~gina~

It was looking pretty nasty on Monday Night Football. The people here in Bakersfield are not all that good with driving in snow either. Of course it's only snowed a signifcant amount once in the 19 years I've lived here.

Hope you had a nice thanksgiving. Sorry I haven't been around.

Thanks Gina, hope you are doing well.

What really stinks, though, is how badly Seattlites forget how to drive in the rain after the three weeks of sunny weather we get in the summer.

And, for the record, I'm staying off the roads tomorrow. *You* might know how to drive in the snow, but I don't trust that our neighbors do.

I missed snow until I read this post. I grew up with 4 seasons in northern California but moved away before I was old enough to drive in it. It was definately something to fear behind a wheel. I was involved in a pretty serious accident when I was child. We hit black ice and almost went over an embankment. I have respect for bad weather.

Around here, people freak out if we get a light drizzle.

You know what's messed up? Here in snowy Minnesota people freak out and drive 5 MPH when it rains.

I have it on good authority that a Subaru Forester can travel 70 MPH down the freeway on 2 inches of freshly fallen snow given a gentle touch on the steering. Not that I'd ever do something like that - especially if my wife is in the passenger seat trying to hold her breath long enough to go unconscious so she doesn't have to deal with the extingencies of the situation.