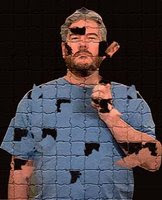 There were an estimated 1 million people in the Puget Sound region who lost power in last Thursday's storm. Some are still without power and another storm is supposed to be on its way. As I drove around this last week, I marveled at how fragile our world is. In one day, all of those things we take for granted -- lights, heat, fuel, food -- were suddenly scarce.

I can only imagine what the poor victims of Katrina experienced. Theirs wasn't just a temporary loss of power.

But all this seems to be an appropriate topic right on the heels of my temporary panic at the thought of losing my computer files. Jane Poe pointed out to me that it was symbolic of "the ultimate impermanency of everything" and that "life is a series of lessons in loss and change."

Truer words were ever typed.

But Seattle's recent series of minor disasters drove home that feeling that everything is subject to the whims (or design) of nature and that we should be less smug when we take our surroundings for granted. It would only take one meteorite hit to send us all the way of the dinosaurs.

At least then we wouldn't have to worry about global warming.
Posted by Time at 9:53 PM

totally resonates for me.

it doesn't even take something as big as a meteorite.

Something as small as a microbe can upend your life forever.

The dinosaurs were doing just fine for millions of years till major instinction events occurred, and here we are setting a record for the fastest suicide of a species yet. Perhaps what you are experiencing is Natures way of telling you SHE has the final word.......

I have become ACCUSTOMED to my comforts, but I am always aware that I could be faced with losing it at any time, and NEVER take it for granted.

The blog photo is puzzling, but the message is clear, "It's not nice to fool with Mother Nature!"

"Who knows where the cold wind blows?"

How you deal with the loss of anything is probally more important than what you have lost!

Hayden, I knew I had a germ of an idea there somewhere :)

THE Michael, The dinosaurs weren't smart enough to speed up their own extinction.

Miss Bliss, Sometimes the pieces fit, sometimes you have to force them.

Whitesnake,
Don't it always seem to go that you don't know what you've got until it's gone.

Glad to see that you have escaped the outages anyway. Hope your weather calms down enough for the folks around there to have a nice, uneventful christmas.

Thanks Lights, I think most people would be happy just to see the lights this year.

Thank you for quoting me, dear one. (I will be sending the check in the mail - however, please factor in the impermanency that even the USPS is occasionally subjected to in their delivery methods). On another note, you are So right about the fact that we should place more importance and value on those "basic needs" that we SO take for granted.
Wonderful photo with this post. Much peace, JP