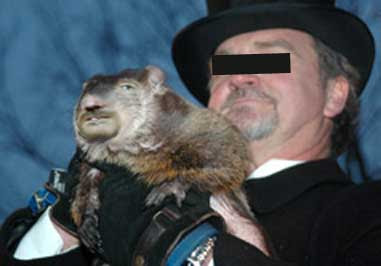 Yesterday was Groundhog Day. In Punxsutaney, Pennsylvania, Punxsutaney Phil (coincidently enough, a groundhog) came out of his den in Gobbler's Knob, didn't see his shadow and tradition says we now will have an early spring.

I'm hoping Punxsutaney Phil is right. Because if you can't trust a groundhog to predict the future, who can you trust?

Punxsutaney Phil was made famous by the 1993 film with Bill Murray called coincidently enough Groundhogs Day. If you haven't seen it, you are living in a hole because they play it over and over. Ironically that is what the movie is about, one man reliving the same day -- Groundhogs Day -- over and over until he gets it right.

The film is the most brilliant description of karma I've ever seen depicted. Bill Murray goes through phases of despair and then acceptance when he realizes he is stuck in the same day. He begins to use the day to improve himself and the environment around him. He reads. He learns to play the piano. He rights wrongs and eventually becomes an enlightened individual. That's when he is free to move on from that one, perpetual day as a new man.

I think about that movie sometimes when I feel stuck in the same situation over and over or feel frustrated that I keep repeating myself and no one seems to hear it. Because even though it feels like I am part of an endless loop, the movie reminds me that we need to keep doing things until we get them right or saying things a little be different until people finally understand them.

Groundhogs are pretty clever animals.
Posted by Time at 7:54 PM

Email ThisBlogThis!Share to TwitterShare to FacebookShare to Pinterest
Labels: Deliberately wasting your time

You know, Phil and I used to be pretty tight. Used to hang out all the time. He was a great rodent.

Then he got involved with the hollywood crowd and he got all full of himself. Suddenly his old friends were an embarrasment.

He introduced me to Andie McDowell and everything was going great. We had a few drinks and we were feeling pretty mellow. Being as how she's all famous and everything I wanted to impress her.

So I offered to show her my nuts. I even told her that she could touch them. I mean, it's not just anyone I show my nuts to, you know, much less let them be handled.

Anyway, that's when she starts screaming and running out the door. Phil just gives me this look like I just gnawed his favorite sapling. He hasn't spoken to me since.

I still don't know what was the big deal. Maybe she's allergic to nuts.

So you are really Hugh Grant? I thought so.

this photoshop is particularly unsettling....