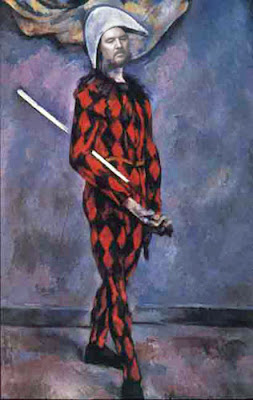 "When Picasso was asked to design camouflage uniforms for Spain's paratroopers, he said, 'Dress them like harlequins.'"

"Nothing makes us blend in like standing out."
--Tim Id

I suppose that standing out to blend in is true in a very esoteric sense. People tend to overlook the obvious. If a thief breaks a back window and sneaks in a house, he is more likely to be noticed by the neighbors than if he simply walks in the front door and walks out with a big screen television.

It is a paradox. People who go out of their way to be different are more likely than not going to be ignored. There is a neighborhood of Seattle called Capitol Hill. It's like San Francisco's Castro District in that it has a reputation of being alternative, fringe, hip, gay, trendy. What's that old joke -- Halloween is redundant in San Francisco. Well, that's true for Capitol Hill. You can walk down the street there and see hordes of people dressed in all manner of uniforms of the counter culture. And after awhile they blend into the scenary

My point is that if something is so out of place and absurd, your brain can gloss over it. This is why naked people streaking through a crowded downtown street in a major city sometimes barely get noticed (not that I speak from experience).

I'm not even sure it is possible to be unique and stand out anyway. Mass media makes sheep of the populace. Obama and his wife are filmed doing a fist bump and now it is politically cool to fist bump. And Obama and his wife are not the first people to do a fist bump. It is just that our entertainment based journalists today are adept at making anything a trend no matter how mundane.

Not sure that how that fits with my theory of blending in, but it was annoying me so I had to belch it out.

Oh well, I'm going off to try and find a different drum beat to march to before someone else beats me to it.
Posted by Time at 8:44 PM

When I was growing up I always wanted to be different like all the other kids. I could never get the hang of it so I'm the same.

Lights,
Being the same is like being different...only the same.

See, this is why people flock to Dizgraceland. There are enough pearls here for a necklace and matching earrings.