Divine rituals of the daily routine 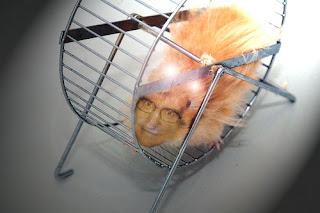 My children remind me of the importance of ritual that stems from daily routines. If things don't happen in pretty much the same way every morning, there is a ripple in the force that turns into a Tsunami by their bedtime. Sometimes it is the ruts that keep us on track.

It is not that I don't like variety. But there is something soothing about sameness uninterrupted by the unexpected. As a public transit commuter, I take the same train at the same time every day and try to sit in the same car (if not the same seat) for each trip. I follow the same path from the train station to my office and turn on the lights in my office in more or less the same pattern each day.

My rituals are not so rigid that I would classify myself as OCD, but they are fixed enough that I get agitated if they are disrupted. For example if for some reason I can not take my usual train home because of a meeting and have to take a later train it snowballs into a major routine shift that messes with my psyche. For one it puts my ritual stop at the gym on the way home from the train station in jeopardy. I must then decide whether to skip the workout (which messes with another ongoing routine), cut it short (which reduces the effectiveness of the routine) or workout as long and then mess up the routine at home with my children (which ripples into the dinner and bedtime rituals they are ingrained in).

I know rationally that there is no cause and effective connection between the rituals of routine and reality. Stepping on a crack really doesn't break your mother's back, but who wants to do it intentionally just in case there is something to it? We learn as children that there is magic in ritual. You get a good grade on a test because you had your lucky rock in your pocket, not because you studied or have a good memory.

Churches know there is magic in ritual. It bolsters faith much more than miracles. And even miracles usually have their root in ritual or routine.

There is even routine to how I break up my routine. For example, I alternate the color clothing I wear from day to day. If I wear black slacks and shoes one day, I need to wear brown the next. I have one belt, but it is reversible black and brown.

Television is fraught with ritual and routine. How many people build their schedules around a favorite program? Okay, DVRs are changing that, but still you need to record "your shows" and watch them at "your time" to find that peace that a routine provides.

Movies, television and books repeat the same plots over and over because that is what comforts people. Villains lose and heroes win. If some rebel writer comes along and reverses the role, they are merely following the ritual of rebellion. Doing the opposite of a routine is simply another routine. Being consciously different is the no different than being subconsciously the same.

Perhaps it is nature that is the source of our need for ritual and routine. Everything in nature comes in waves and patterns that repeat and cycle like clockwork. Don't get me started on Fibonacci numbers (a numbering system based on the rate at which rabbits reproduce). Perhaps our daily routines and rituals are our macroscopic mimicking of the microscopic world of the atom and subatomic particles. We are pulled along the orbit of our lives by the gravity of our routines.

So give us this day, our daily routine and forgive us our rituals. For they etched on our DNA and keep us going down that middle road I've been harping on, to enlightenment.
Posted by Time at 10:28 AM