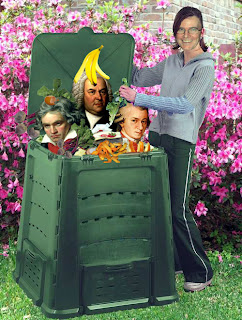 I don't really have strong feelings one way or the other about composting. I was just staring at the compost bin in the kitchen at our office and I had this idea for a great ad campaign for some composter company that could use images of great classical composers hawking composters

as "the Great Composters."
I mean Beetoven is a natural for a compost ad:

Few people know that Ludwig Van BEEToven was one of the world's great composters as well as a great composer. And if he were alive today, he'd tell you that our new Slopco Great Composters line is one classical composter.

I come up with enough pearls like these in any given day to string several impressive necklaces, but so far my genius flys pretty far under the radar. Case in point was my idea for the Crockpot Restaurant. I can't wait for that concept to heat up.
Sometimes when I blog I feel like I'm just shuffling around in an old robe, muttering to myself and opening cans of cat food.
But I digress.
Although I am in marketing, I really wish I'd pursued a career path early on as a copywriter at an ad agency. Of course if I had, I'd probably be standing in an unemployment line muttering to myself and wondering why I'd been replaced by some hotshot young copywriter who could tweet award winning copy in 140 characters or less while I was whipping out gems like "The Great Composters."
I suppose we follow the meandering paths through life for a reason.
Posted by Time at 10:24 AM

Jesus, dude. Forgot how funny your posts are. You're a pleasure to read. Hope you are well.

Jesus, dude. Forgot how funny your posts are. A pleasure to read. Hope you're well.

And I think I just commented twice now. Sea legs not back yet.

Thanks (twice)! Good to hear from you! Glad you wandered back to blogger again. Hope you keep posting!

I read all of these while at work yesterday. But the computer blogs the comment section and all the photos. I finally saw this photo this morning. It's creepy! One of your creepiest. Eeuuuwwww!

I'll be back more often. I'm going to take your advice. You're my favorite blogger too. Always have been.

Aww...the computer BLOCKS the comments and the photos. And I'll take this being my creepiest photo yet as a compliment. You always did like the disturbing images. Glad I am still your favorite blogger :)

For some reason, I have been blogging regularly lately. Nothing like I did in 2006, but pretty close. But now pretty much the only person who reads my blog is my nephew. And I think he does it out of obligation because he is family.

Regardless, I have started treating my blogging as I do my exercising. The best time to do it is when you don't want to. And I always feel better after I do it.

As they said in the movie Werewolf in London, "Stay on the road."