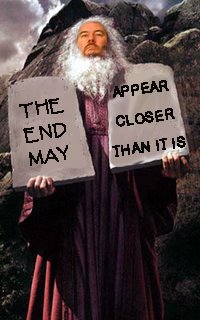 
The people who should be worried are the nut jobs who believe that if they hold out long enough, medical science will figure out a way for humans to live forever. I saw a Morgan Spurlock documentary on groups of them who he met at a "Live forever" party where they all held the common belief that they could extend their lives or become immortal. This could be through science developing ways to regrow organs or transplant their brains into robots or computers. The irony of the group was that most of them looked like overripe fruit that was picked too late for preserving. And if they truly going to be immortal, the future won't be pretty.

As part of Spurlock's documentary he visited some of the Virtual Reality and Artificial Intelligence scientists who were questioned about the possibility in the future of copying the contents of our brain into a computer and living forever that way. This led to a discussion of a technological singularity that could take place somewhere around the year 2045. The Singularity is time when technology reaches a point where the computers are so intelligent that they bypass humans and begin their own self-improvement programs that make them super powerful and not dependent upon humas. In theory human intelligence could merge with the machines and become trillions of times more powerful than it is today.

It sounds very much like the Terminator movies to me.

Even if science could come up with a way to keep people alive forever, why would we want them too? Isn't death natures way of keeping the planet from getting overcrowded? So by making people immortal, wouldn't we have to eliminate new people being born altogether?

I wouldn't want to live forever. I'm not to keen on living past 80 or so. Oh, it would be okay if they could rejuvenate my body, but even so, I think the biggest threat at that point would be boredom. There are only so many programs you can binge watch on Netflix. And even if your brain was melded with a supercomputer, wouldn't  you just be super bored?

I will bring this post to an end before it rambles on forever.