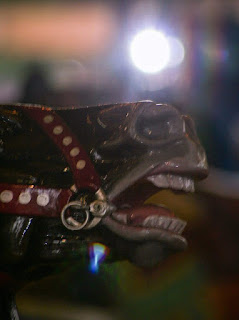 
When the clock struck midnight (PST), I didn't really put much thought into looking back, resolutions or what the new year would hold. Years and time are, after all, artificial constructs of men. A new year means more when you are young and believe that everything is reset on January 1. After 50, it is just another day closer to whatever.

That sounded more pessimistic, didn't it? Or is it just being practical?

Time just startles me sometimes. And looking back reminds me of how foolish I was in many instances. I took my children to a small park on New Year's Day. It was next to a forested area with many old growth trees. I stared through a chain link fence at the trees and remembered a time that I believed that there were spirits living in the woods. I remembered burning incense and holding crystals and chanting. And time after time nothing happened. At the time I thought it was because I wasn't spiritual enough or wasn't clearing my head of doubt. But now I think it was all just wishful thinking to avoid the inevitability of my own mortality.

Now I'm getting lugubrious. It's what happens when I reflect upon the passing years and how much has changed and how much is going to keep changing. It was driven home last night when I was watching Amadeus on Netflix (1984 winner of Academy Award for Best Picture). I made the mistake of Googling the star, Tom Hulce (who was also in Animal House) and saw a photo of what he looks like now.

Ok, it isn't that he looks terrible.  He is in his sixties now after all. It's just that he stopped acting and went behind the scenes as a director and producer and I hadn't seen him in years. So I still had this picture of him in my mind as he looked in Amadeus. I'd also seen him in real life about 20 years or so ago. He lived in Seattle and I saw him at a restaurant. And he still looked like he did in Amadeus (just shorter). Anyway I looked at a photo of him now and there is nothing recognizable about him to me. If I'd seen the photo without knowing it was him, I wouldn't have been able to tell you who he was.

That is the trip about time. In your head you picture someone or some place the way it was. Then ten or 20 years go by an you see that person or place and time has eroded them but not your mental imagine. It is hard to reconcile the two. Because then you have to accept that time is having the same impact on you.

So that's a round about way of me saying why New Year's isn't my favorite time of the year.