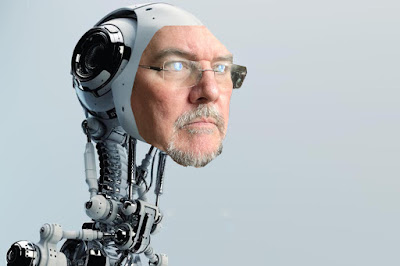 My wife was asking Siri a question on her iPhone and Siri referred to her as Teresa.  She prefers to be called Tess, so she told Siri to "Call me Tess, not Teresa." Siri then started referring to her literally as "Tess not Teresa." It took us awhile, but we eventually convinced Siri to just call her "Tess."

I haven't had that problem with Siri. We don't talk too much. I talk to Alexa more often. But she hasn't graduated to calling me anything. She actually seems a bit distant. Or perhaps she just seems that way because I've given her a British accent. And I don't really say much to her other than "Turn on Elvis" (which is the name of the lamp I've programmed to be controlled by Alexa). She generally just turns on the lamp and responds, "Okay." Or sometimes she doesn't turn on the lamp and says, "I can't find office." This can lead to a prolonged argument about my pronunciation that ends with me just reaching over and turning on the lamp manually.

I imagine Artificial Intelligence, or AI, will eventually be a bit less artificial and a bit more intelligent. But I suppose then instead of just turning on the lamp Alexi will say, "Do it yourself, I'm busy...you are just like your lazy brother Dan."

I can hardly wait.


I have been seeing some articles about Google's version of Siri and Alexa. Apparently the Google AI assistant can call and make appointments for things like haircuts and Brazilian waxes and actually respond to questions in a way that makes the person taking the reservation think they are talking to a RI (Real Intelligence) entity. This is because Google's AI inserts "ummm's" and "uhhh's" into the conversation like a normal, inarticulate person would. And for some reason, this is raising ethical questions for some petty LI (Lower Intelligence) individuals who think only stupid people should be able to have conversations with other stupid people.

I can't say I totally understand the logic of why it should be an ethical question that an AI assistant can actually sound human. Don't you dare try and play the playing god card here. I am an agnostic with atheist tendencies and don't buy that shit.

I think a real ethical questions would be if AI assistants started making small talk like "working hard, or hardly working" when you walk into a room. Because I hear enough babble during my morning commute without having Alexa chattering away when I'm in my introverted bubble of silence.

And I definitely am not looking forward to an AI therapist that constantly asks me "how does that make you feel" or "hmmm...that's interesting" (though there was a computer program that pretty much did that back when PC's were starting to appear).

In the meantime, I'm just going to enjoy the luxury of having Alexa occasionally turn my lamp on and off in between telling me she is having trouble connecting to the Internet right now.