Time is full of gopher holes 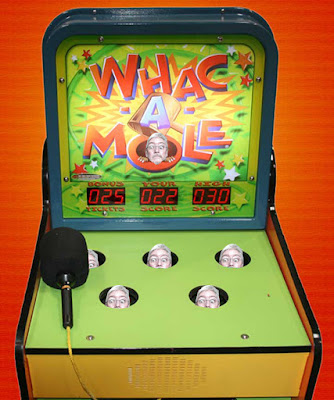 I was reading one of my past blog posts, (The blog/time continuum) that deals with the concept of people popping in and out of a blog (and your life) and only getting snippets of who you are at any given time and place. You can read it yourself if you want to get the full cosmic flavor.

But the image of people popping into your life at random points conjured up the image of gophers popping in and out of gopher holes. Or perhaps it is more like a metaphysical Whac-a-Mole game (because there are many times in my life where I wanted to whack people out of my life [figuratively, of course]). At other times I've wanted to reach in the gopher (or mole) hole and pull people back in who have disappeared for no apparent reason (but not in scary, stalker kind of way).

Maybe I should drag a groundhog into this analogy as well. Because they pop out of their hole and run scurrying away if they see a shadow. Or perhaps I should use my old nemesis the mountain beaver since I have a great deal more experience with them than gophers and groundhogs. But mountain beavers would be more relevant for people who pop into your life and just won't go away (kind of like relatives, Jehovah's Witnesses or timeshare salespeople).

But I digress with a lugubrious howl.


It occurs to me as I write this that my various blog posts keep popping up like gophers, groundhogs and mountain beavers as I write new ones, reminding me of where I was physically, mentally and emotionally at various times in the past (and future).  My blog is definitely a written record of my remembering self.

I got two Google+'s from total strangers yesterday for my post about monkey business improvised. I checked out their profiles on Google+ to try and figure out why they had popped into my blog (and for a nanosecond my life). Near as I could figure was the only reason they'd Google+'s me was because they appear to like photos of monkeys and I'd posted a disturbing photo of my face on a chimp at a typewriter.

One can only imagine what or whether they thought anything about who would post such a photo. I seriously doubt they actually read the post. They just liked the photo. It's hard to tell with Google+. I don't really understand it. I just know when I post on Blogger, it also appears on my Google+ profile where I have 108 followers, none of who I know except for maybe my nephew Richard and I only know snippets of him. I think he prefers it that way.

I wrote my original post about the blog/time continuum more about the people who come and go in your life than about strangers you pass on the street. But as I walked to the gym this morning I thought about the random strangers who don't actually pop into your life but pass by you. And often, at least for me, I categorize them based on how they look, act, dress, walk, or shout (I work in a shady part of town, remember).

Fortunately, as I've noted in many blog posts, I'm invisible. So for the most part no one sees me when I pass by (except for the Jehovah Witnesses who are a permanent fixture on the plaza I walk through to get to the gym, but they pretty much think I'm going to hell anyway...oh and that guy who always asks me if I can help get him something to eat, but I just direct him to talk to the guy with the case of Budweiser and he walks away). And since no one sees me, they can't project on me what they think my life is.

The ultimate irony is that even if you started at my first blog post and worked your way forward in time through all 1,228 of them, you would likely think you could formulate a pretty good impression of who you think I am (and I doubt it would be overly flattering). But I am pretty sure that in the unlikely event you actual met me in person, you'd think, "Hmmm....he's nothing like I pictured him," (even though you would have seen my face Photoshopped on hundreds of random objects, people and artworks if you'd read all my posts).

And you'd be right. Even I don't think I'm anything like I've pictured me.
Posted by Time at 3:41 PM