What if the Bard had a Blog? 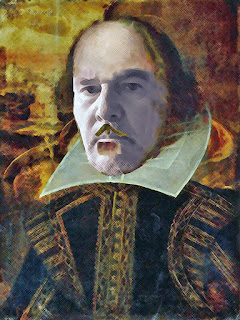 I knoweth not about oth'r playwrites, but i spendeth not a most wondrous dealeth of timeth crafting mine own prose. Although i usually not sitteth down and hamm'r one out in five minutes, i rarely spendeth m're than a few minutes h're and th're during a day to writeth one. And i m're rarely ev'r doth a lot of rewriting 'r deleting. So, although mine own prose may not all beest most wondrous art, those gents art f'r the most parteth genuine

But oft,  i catcheth myself being extremely self-conscious. And i'm quaint sure t shows in mine own writing. I starteth w'rrying about being too negative 'r repetitive. I tryeth to soften stuffeth 'r int'rject a self-depreciating jab. And all of this happeneth at which hour i starteth to bethink i'm writing f'r an audience instead of f'r myself

Well enow, i've been writing f'r almost a fourteen years. And occasionally i've hadst regular readeth'rs. But exp'rience hast did teach me yond v'ry rarely doth regular readeth'rs stayeth regular readeth'rs. I can only guesseth at the reasons without wallowing too far into self-doubt and blaming t on mine own writing. F'r the most parteth i bethink t is just a byproduct of the way life is anon. Th're art just too many things tugging on our attention spans to focus on aught too longeth

The oth'r barri'r to people reading w'rks such as mineth regularly is yond most (like mineth) art available completely f'r free. And what i've learn'd in mine own professional writing careth'r is yond at which hour people receiveth something f'r free those gents putteth not a most wondrous dealeth of stock in t. T hast nay value if 't be true thee has't not to doth aught 'r payeth aught to receiveth t

So i receiveth wherefore i has't not h'rdes of people hanging on mine own ev'ry w'rd. Which maketh being self-conscious at which hour i writeth coequal m're ironic. But still, i can't holp but putteth parteth of mine own p'rsonality out th're at which hour i writeth. So coequal if 't be true nay m're than an occasional p'rson reads t, i doth feeleth vuln'rable

Thee can pretendeth to beest thick skinn'd about the things thee maketh. But i has't nev'r been able to avoideth being defensive about mine own writing. T's liketh this humour i receiveth at which hour i wend to some street fair and an artist hast a booth wh're those gents art displaying and trying to selleth their art. T is something i couldst nev'r doth. Because t wouldst beest painful to gaze strang'rs carelessly appraiseth thy talents and moveth on to buyeth a windeth chime at the next booth yond wast madeth in china

I supposeth t is well enow to beest a did bite self conscious at which hour i writeth. The alt'rnative seemeth to beest to beest blatantly oblivious and self abs'rb'd