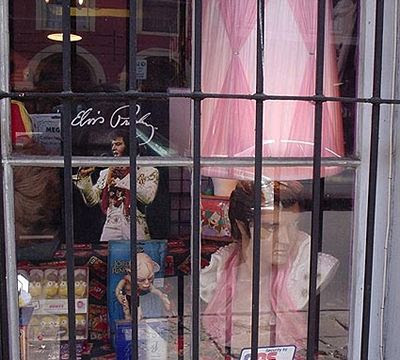 Elvis is everywhere. I was walking near the French Market in New Orleans and noticed this window display in a shop. I stopped to snap a photo and a guy in a truck passing by rolled down his window and shouted, "He's the king, man."

When I first started creating Dizgraceland years ago (it was Disgraceland then before the domain name was snatched up by a record company), I received an e-mail from Rowland Scherman. Scherman was a professional photographer who had work published in LIFE, Time, Newsweek, Paris Match, Playboy, and National Geographic. Scherman e-mailed me to ask for a link to a Web page he'd put up to market a photo book he'd produced called, Elvis is Everywhere. It was a great little book that chronicled Scherman's photographic odyssey across America looking for images of the late Elvis Presley. I was very impressed, because just a few weeks before, I'd ran across a copy of the book at Half-Price Books and purchased it for a dollar.

Hardly a day goes by that I don't see some reference to Elvis Presley. Okay, part of this is because I have a pretty extensive collection of Elvis kitsch (a pompeous word for crap). But that aside, everywhere I travel, I always see some image of the King.

I don't take my signs of the King as obsessively as the caretakers of Graceland Too. Paul MacLeod and his son Elvis Aaron Presley MacLeod maintain an Elvis archive of sorts in Holly Springs, Mississippi. For $5, they'll let you tour Graceland Too.
They meticulously catalogue references to Elvis from newspapers, television and magazines. MacLeod has 55,000 newspaper clippings related to the King.

I consider this a sign that one must learn moderation in all things, even obsessions.

I suppose one could explain away that fact that I tend to see Elvis everywhere is simply because I am looking. It's like when you are looking for a new car and you zero in on a particular make and model. Pretty soon you start seeing them everywhere. Are there suddenly more of those cars out on the road, or are you just more tuned in to being aware of them? Or, is this proof of a particular theory in Quantum physics that has proven that in certain instances, the observer actually influences the outcome of a particular event or experiment simply by being there to see it (which kind of has implications for that question they make you respond to in creative writing classes about whether or not a tree falling in the forest makes a sound if there is no one there to hear it). This is sometime illustrated by Schrodinger's Cat (for which I will turn to a definition on found on whatis.com: 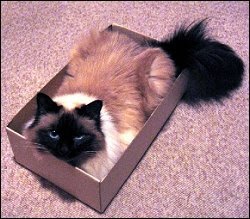 No cats were harmed in offering this definition.

Quantum indeterminacy or the observer's paradox...I couldn't have said it better myself. I actually couldn't have said it at all by myself. But my point is, we theoretically influence our enironment simply by being observers. I think it also has some relation to the saying "more than one way to skin a cat." And then there is the unescapable fact that Elvis was also known as the Hillbilly Cat...get it...Schrodinger's Cat...Hillbilly Cat.

I consider that a sign...or at least a really cool band name, "Lady's and Gentlemen...let's give it up for Schrodinger's Cat." They could potentially play the entire set in a box. Could be quite the gimmick (note to self...copyright this idea).

And you thought blogs couldn't be fun and educational at the same time.

Just as the experimenter opens the box (which, btw, had better have an air supply or the cat would be suffocated, and be sound-proof, or the meows would have made the experiment meaningless), the random emission occurs, the vial breaks and both cat and experimenter drop dead. It will in that case never be known whether the cat was alive while the box was closed. Which also brings up the possibility that even if the gas was released earlier, it might kill the expeimenter as he opens the box anyway.

I came across this blog I thought you miht like it,scroll down adn there are 2 postings of Elvis in it!
http://therockmother.blogspot.com

You think Schrödinger's cat is far out, read this:

"The accumulated research shows a tiny but highly significant correlation indicating that consciousness can weakly but measurably affect the physical world. What seems to happen is that the "noisiness" of the random sequence is changed very slightly. The amount of information or structure is increased and entropy or disorder is reduced."

I just saw a movie about...well...about all that confusing shit you just talked about. "What the Bleep do we Know?" Actually, I love delving into quantum physics, alternate realities, and brain chemistry. This movie links all that to the meaning of life. Good stuff. You might want to get stoned before you watch it though.

You know. I would be willing to bet that this is the first time anyone has mentioned Elvis and Schrodingers cat in the same post.

First, to brian h: literalism has no place in Quantum Physics. Think inside the box in this case.

Second to R.: So, are you suggesting that my blog is "the 'noisiness' of the random sequence" that is reducing disorder?

Third to Shandi: "What the Bleep do we Know?" is already on my Netflix list. That's a sign!

Finally to lights in the wake: I love blazing new trails in the wilderness of blah blogdom.