Digging in the root cellar 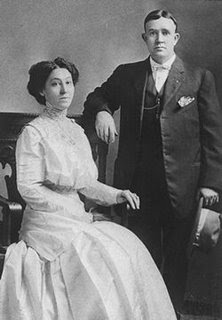 Gertrude Walburga L**** and Eugene Chester H****
"Digging in the root cellar" is the working title of the book I am thinking of writing about my adventures in genealogy. It's not that I had a particularly romanticized image of my family's history before I started the journey. I used to sit and listen in horror at my mother talking about her Grandfather Austin and how he would hide in the cellar when traveling salesmen would come to the door to make sure his wife, my great grandmother Jennie, wasn't flirting. Then, pumped up with jealousy, he would apparently tie his dirty underwear in knots so it would be a pain for her to wash them. I think that is where the phrase, "Don't get your knickers in a twist" came from.

Despite the obvious idiosyncrasies of my great grandfather, it has been some of the names that I've discovered nestled in my family tree that are giving me the willies. For example, my father's mother's name was Gertrude Walburga L**** or Lennis or Laners (her family was from Belgium and apparently the census takers had trouble understanding their English when recording the name). The name comes from St. Walburga, the Catholic church she where she was baptised in Minnesota.

But that is nothing compared to the names I'm digging up on my Grandfather H****'s side. His name was Eugene Chester H****. His father's name was Chester H****. Chester was born in Canada, but his father's family stemmed from Massachusetts (including an Ithamer H****). As I get to know Chester better I discovered that, despite being born in Canada, he managed to join or get drafted into the Union Army and fought with the 4th Iowa Calvary during the Civil War. Somewhere during that time he also managed to meet and marry Lucinda in Illinois. This was a surprise to me, because my great grandmother's name was Fanny Dunham. So apparently, he married and either divorced or abandoned Lucinda before meeting Fanny a couple years after the war.

When he did marry Fanny, he had three sons: J. Fay, Eugene Chester and Guy H****. Guy was the youngest and born in 1874. Four years later, Chester shows up in Centerville, Kansas sans Fanny and the boys and marries 22 year old Lillian Huntley "Lillie" Boyer (ever notice how white trash people end up with nicknames in quotation marks).

I don't know what happened to Fanny. I'm assuming she died. But according to the 1880 Census, J. Fay and my grandfather ended up in the Soldiers Orphans & Indigent Children Home in Davenport, Iowa. Little Guy was left with a neighbor.

Got to love that Chester. But giving him the benefit of the doubt, I kind of assumed maybe Fanny died and he left the boys long enough to go find a new mother. Unfortunately, this doesn't seem to be the case. I'm not sure what Lillian had going for her, but, although she was only 22 when she met Chester, she had already been married twice before and had had one child a year before marrying Chester. And instead of sending for Fay, Eugene and Guy, Chester began a new family with Lillian. In the course of 13 years they had five children of their own.

This is where my theory on white trash names comes in. Lillian, who was born in Macon, Missouri, named her children James Easely H****, Colonel Fred H****, John Harrison "Harry" H****, Corrine "Katie" H****, and my favorite, Rupert Curtis "Hoot" H****. Can't you just hear my great grandfather hollering out the back door, "Hoot, you get your lazy white butt in this house right now afore I whoop some sense into ya."

After popping out Hoot, Lillian apparently had had enough of Chester. She left him and married yet again. Lillian died in 1937 in Morris, Oklahoma. Chester died in 1898 in Kansas.

As far as I know, my grandfather never reunited with Chester. But ironically, in 1892, he married his first wife Mary Ettie Davis in Kansas City, Missouri. A year later they had a son and named him, you guessed it, Chester. My grandfather divorced Mary and sometime after that and 16 years later met and married my grandmother. Fortunately they named my father Eugene Arthur H**** and left Chester and his legacy of white trash names in the dust.

Wow, you've certainly learned a lot about your history. I only know as far back as my grandparents. Before that I have no idea. If it's any consolation my maternal grandparents were named Addis and Gladys.

I had an Aunt Gladys. We used to call her Happy Butt. Not to her face, of course. She was married to Otis. Last name was Frome. It wasn't pretty.

"Shandi," the thought had occurred to me that I risk offending any relatives of that particular branch of the family. Guess I could just hang up a sign that says, "If the blogs a rockin', don't come knockin'"