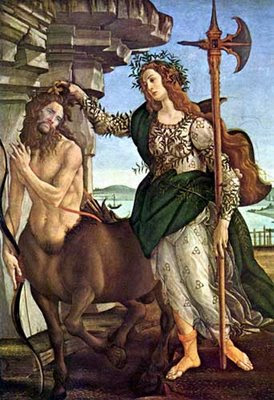 Centaurs are a mythological creature that are half man and half horse. Generally they are depicted with a man's torso on a horse's body because let's face it, a horse's head on a man's body would look downright silly.

Now I suppose talk of Centaurs may conjure up in some people's minds the nasty little incident that occurred in Enumclaw, Washington not too long ago where a Boeing Engineer took his love of horses to an extreme level. His love affair with a stallion ended poorly (pun intended).

Centaurs get their name from Centaurus, the son of Apollo and a nymph named Stilbe. Centaurus apparently loved horses, too and fathered the mythological herd of half horse and half horses that would be known as Centaurs after sowing some wild oats with a few fillies.

Historians theorize that the myth of the centaur was actually spawned when tribes of people who hadn't domesticated horses encountered tribes of nomadic people who had figured out it is much easier to ride than walk. The horseless tribes mistook the men mounted on horses as one creature.

This was more common then one might think. The Aztecs, for example, thought Cortez's mounted soldiers were half man and half beast. Considering what happened to the Aztec culture after encountering Cortez, they were probably right.

Isn't it funny how we saddle ourselves with these myths.

This post is classic Tim-id. I absolutely love your sense of humour. Now I must ask, what nasty little incident in Enumclaw with the Boeing Engineer??? Sounds intriguing. Of course I could try and work it out for myself but I don't want to get the wrong end of the stick so to speak.

Whats this tripe? In a world where gnomes take mad-cap vacations you deny the existance of centaurs? Pu-lease!

Next you'll be trying to make me believe that Daphne didn't run away!

(There were rumors amongst the Romans that the Huns were half horse, too. The rumors I've read didn't specify which half.)

Thanks Angel. Hmmm...I didn't want to get into the graphic details. How can I put this delicately? Instead of mounting the horse, he paid to have the horse mount him and he died when his internal organs burst. It was quite the scandal. The farm in Enumclaw apparently was love shack for people who enjoy having sex with various animals. Our state legislature has since passed a law making it illegal to have sex with an animal. The first man prosecuted here was a man discovered by his wife having sex with their pet pitbull. He claimed it was puppy love and was acquitted. :)

Hayden,
What's this tripe? I don't believe I was denying the existence of centaurs, just explaining it. I've too many people who were horse's asses in my life not to believe in centaurs.

I suspected that was where the story was headed but I just wanted to make you say it....*giggle*

By Photoshopping yourself on a Centaur, are you fantasizing yourself as a practitioner of Enumclavian love? Tim. I had no idea! And you mock Michael David McPhail...

Kristy,
I was just horsing around.

They say we are all act like animals some times.
When you consider pack animals and how they live, you need look no further than your family!

Really speaking though this post is flogging a dead horse!

Just to clarify my previous comment.
As it could be seen as me taking a shot at someones family.

Family I meant any ones?
We have a leader a mother and those that follow........etc etc etc..

Steve, Straight from the horse's mouth, I'm sure.

It's ok to love horses, just don't LOVE horses. If you know what I mean.

At least not really big horses.

Ahhhh Tim .... you have such a wonderful way of relaying history.
It truly leaves me chomping at the bit for more.

Lights,
Technically, this man was the lovee, not the lover. Though he was obviously open to the horses advances. A bit too open, mind you, but...well, you know.

Blaznfyre,
When these stories crop up, I like to jump right on them with unbridled passion.