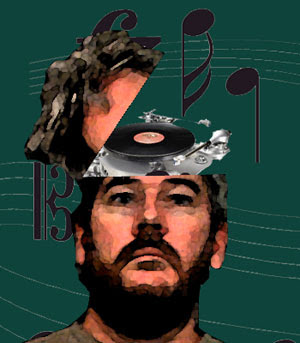 I'm one of those people who is always getting a song stuck in his head. People go by whistling or even mention a phrase that reminds me of a song and the damned thing starts playing a continuous loop in my brain. So far today it has been You can't always get what you want by the Rolling Stones followed by Nights in White Satin by the Moody Blues.

My older brother used to play Nights in White Satin over and over when he was a teenager. I think it had something to do with puberty, but I can't be certain. I desperately wanted to smash that record along with his 45 rpm of Frida Payne's Band of Gold (no one under 30 probably even knows what I'm talking about when I say 45 rpm...young people annoy me). He also played Tommy James and the Shondells version of Crimson and Clover, over and over (there is a certain irony to this if you have ever heard the song).

It's not always the annoying songs that are stuck in my head. Sometimes I wake up with tunes circling about that I listened to while exercising the day before. Tori Amos and Alanis Morissette frequently serenade me in the waking hours. Generally it is some of there more obscure stuff that sticks in my head. For example I often have the line from Tori Amos' the Waitress scurrying about in my brain (...I want to kill, this waitress...she's worked here a year longer than I). I haven't a clue what that means, either.

I suppose it could be worse. I could be listening to voices telling me what to do. But it is pretty disconcerting to hear crap like Air Supply singing "I'm all out of love, I'm so lost without you..." when I'm sitting on the toilet.

Occasionally I'll try and pass the stupid songs on to my co-workers by whistling or singing a few lines when I'm walking by their cubicles. There is a certain satisfaction when you walk by later and hear someone humming Islands in the Stream and grimacing because they don't know why or how to stop.

I'm going to leave you all with one final thought: Grandma Got Run Over by a Reindeer.

Hayden,
Puleeze...next you are going to tell me that you own some of Edison's orginal cylinders. You aren't that much older than me.

BTW, Do you want to buy some 8-track tapes? I have Styx Grand Illusion and the Beatle's White Album on 8-track.

This happens to me too, so annoying, especially with a houseful of kids. Its usually some offense rap song line that gets stuck in my head. I miss 45s, remember those little plastic things you stuck in the big hole so you could use the skinny spindle?

Funnily enough I was listening to Nights in White Satin on my MP3 the other day. Maybe I sent it through cyber space telepathically just to drive you crazy. Spooky eh?

No reel to reel?

I have Simon & Garfunkels "Bridge over Troubled Water", The Ventures, Jan & Dean and Janis Joplin.

Lately, i can't get the dumbass "Hamster Dance" outta my head.
Why?
Because my baby goes apeshit whenever I play it.
I really need to find a new song for him ....

Whistling, humming or suggesting a bad song to a co-worker as you tour the office cube farm is the sincerest form of torture. It is a passive aggressive person's weapon of choice....nice method, T.

Kat,
Sure do. I bet we'll see them in museums soon. MP3s just lack substance.

Angel,
Spooky yes, especially that you have it on your MP3 player :)

Blaznfyre,
I dated a woman years ago who had a reel to reel collection of the entire Beatle's catalogue. That was her only redeeming quality. I fortunately have never heard the hamster song. I remember Alvin and the Chipmunks, however.

I'm so grateful that I don't know the tune to "Achy Breaky Heart"....whew.

What a coincidence, I have been plagued by George Harrison's "Give Me Love" for about two weeks now. This replaced "Dancing in the Moonlight" by Toploader.
But at least I like those songs. I could be worse. Like when I couldn't stop "Tiptoe thru the Tulips" for a week.

Sum things in life are bad,
They can really make you mad,
other fings, make you swear and curse,
When ya chewing on life's grissle,
Don't grumble, Give a whistle,
And this'll, Help fings turn out for the best.
And,
Always look on the bright side of life!
whistle, whistle whistle,

reel to reel? hummm... don't remember if I finally dumped it and all of the tapes, or if it's in a closet somewhere....

Lights, You aren't dissing Tiny Tim, are you?

Hayden,
Reely? BTW thanks for the award for you movie contest. It arrived today. Love it!

You know, when I'm tormenting the girls by putting songs into their heads, I usually go for the crocodile's theme from Disney's "Peter Pan."

Either that or the song from "The Sound of Music," "Doe a deer, a female deer..."

Of course, there's always "Be a Dentist" from "Little Shop of Horrors."

Or "Timewarp" (If you're not a virgin, you know where it's from.)

I love the idea of passing on the offending song, tune or lyric to another as part of one's own healing process ;-)

FP,
I remember doing the Timewarp and Doe, a deer, but the crocodile song escapes me.

JP,
There was movie with Denzel Washington where a psychotic killer was executed, but his soul left his body just before he died and it kept passing from body to body. You could tell because everyone his soul entered started singing, "Time is on my side..."

Somehow, all of this is related. Somehow...

Kristy,
Grandma Got Run Over by a Reindeer was recorded by Elmo Shropshire and Patsy Trigg. The only remotely similar song I can think of that the Irish Rovers recorded was the Unicorn Song. But I remember the blog formerly known as Fire in the Kitchen.

But as they say in Arkansas, "Everything is relative." Wait a minute, that may be "Everyone is is a relative." It is Arkansas.

Now that I think about it, surely it was "Islands in the stream." You were thinking about whilst seated on the throne hmmm!

It commemorated the most recent years' event, you know! very exclusive. someone w/ your command of seach engines... I mean... movies.. deserves no less!

Whitesnake, I actually don't think I'd be seated on the throne if I was thinking about "Islands in the Stream." I'd be standing in front of it.

Hayden,
Knowing where to find the answers is almost as good as knowing them. And the hat is still way cool! Thanks again!

Hey! Grandma Got Runover by a Reindeer WAS recorded by the Irish Rovers. Just because you don't happen to consider theirs to be the seminal version of the song doesn't mean it didn't happen. I would remind you that some people associate classics such as Blue Moon with the recordings of lesser artists such as Elvis Presley. We value the opinions of those individuals too, no matter how ill founded or poorly conceived they may be.

Also, Hasslehoff's version of Hooked on a Feeling is every bit as legitimate as the original. Don't even try to deny it.

My Dad loved the Irish Rovers.

I once had "The Soprano's" theme song stuck in my head for a month after K. bought the first season on DVD. She skips over the intro now so I don't have to put on hearing protection.

Before I quit watching broadcast television regularly I had all the jingles from the commercials stuck in my head (thankfully not playing at the same time.)

I don't know how people live with all that noise in their minds.

R.
So you are a Hillary Clinton fan? Good for you!

"some green alligators and long-necked geese, some humpty-backed camels and some chimpanzees,
Some cats and rats and elephants, but sure as you're born, the loveliest of all was the Unicorn"

Don't be hating on the Irish Rovers now!

tim id "So you are a Hillary Clinton fan? Good for you!"

Please enlighten me. What does that sick sad woman have to do with having a good memory?

R.
Hillary did the video short based on the final scene in the Sopranos.

First, Blaznfyre, you're just cruel. "Bridge over Troubled Water" gets stuck in my head for days at a time after the tiniest reference.