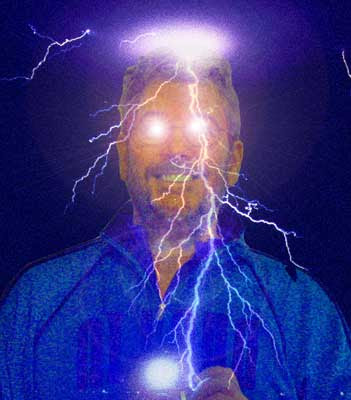 Our heatwave took a nosedive yesterday and created a brief symphony of thunder and lightning around Seattle. Along with it came the flurry of e-mails and conversations about not talking on the phone, using stereo headphones or walking around with a long metal pole as long as lightning was a possibility.

It struck me (a thought, not lightning) that we have become a nation of worriers. I'm of the ilk that if lightning is going to strike you it will be as random an event as winning the lotto and it doesn't pay to spend too much time worrying about it.

Television news feeds our worrywart natures. Tess and I were watching the evening news last night and they ran a segment about thieves breaking into houses using a new method called lock bumping. They said they wouldn't show us how it was done for fear of tipping off thieves, but the reporter was carrying around a rubber mallet and a key blank that hadn't been cut at the hardware store. It was pretty evident that lock bumping involves shoving the key blank into a lock and whacking it with a rubber mallet to "cut" key to the right shape and then open the lock.

The reporters interviewed a chubby locksmith who named three locks that this wouldn't work on. All of them cost more than $150. Tess immediately jumped up to check our front door and declared we needed a bump proof lock. We've lived here two years and no one has bumped the lock. I'm assuming even if we did have a $150 lock they'd just kick in the door if they were real determined. But I'm willing to bet that chubby locksmith is laughing all the way to the bank now that he has planted the bump proof lock seed in a few thousand fearful minds.

My point is, ignorance is bliss. If we put all of our energy into worrying about the multitude of things that could go wrong, we aren't likely to get out of bed. Common sense is the best preventative medicine. Worrying about lightning striking you will just keep you from appreciating how beautiful it is to watch.

Huh. Your news-u-tainment source is a year or two behind the curve. Bumping is a popular, well understood and simple method for defeating the majority of today's installed mechanical locks.

Bumping makes you vulnerable because it leaves no evidence. Even if you file a report with the police, without any physical evidence of break-in insurance companies can reject your claims and possibly accuse you of fraud or negligence.

Statistically speaking, in the neighborhood you're living in you probably won't get robbed. Common sense is to stay on good terms with your neighbors and keep an eye out for each other's property.

Crazy the stuff we worry about today. I think part of it is too much time on our hands. Who worried about lightening when they had a crop to get in?

I'm with kat. too much time and - importantly - too much information.

we act as if threats 3000 miles away were occurring in our own backyards.

20 years ago we reacted to local events. Now we react to national events. Disaster feels more common because we're shopping a bigger puddle.

it isn't that bumping isn't a risk, but that all risks are perceived at a higher threat level than appropriate.

Ahhhhhh, TV news and the imaginary catastrophe of the day. I remember quite a long time ago CNN attempted to run a hour "good news only" news broadcast to combat criticism of negativity in their broadcasts. Guess what, no one watched so it lasted only a short time.

Tess and Tiffany would have much joint fretting to do if they ever got together. Although, while she dreams of being a 'stormchaser' whenever lightening storms come through the area, she refuses to ride the subways. After a year of paying $20 per ride for cabs instead of $2 per ride for the subway, I showed her an article stating that statistically one was more likely to be struck by lightening than to be victim of a serious crime on the NY subways. She informed me that she doesn't ride the subways because she's afraid, rather because they smell like urine.

I guess she had a point.

R. I guess our news station is behind the times. I see a bumpkey company is advertised on my blog (triggered by my content) where you can buy bumpkey sets to open any lock. I'm assuming the solution is a new kind of lock. I don't however think bumping makes you vulnerable because it leaves no evidence of a break-in. I think it leaves you vulnerable because some puke can get into your house anytime they want.

Iridethebus,
No news is good news. I guess the fact that NYC's mayor rides the subway to work does change her mind. There's no denying the smell.

you realize that the news media does that on purpose.
Well, not just the news media.
What's worse? The public, in general feeds into frenzy and actually seems to thrive on it!

I don't watch the news anymore.
I still read my internet news feeds and newspapers, but I take all of it with a grain of salt and a fair amount of skepticism.

Bumping is nothing new, and in fact, you can find directions on how to bump on the internet.
Educational video.

I'm such a sucker for these types of things. I'm prone to obsession and anxiety to the point of paranoia. Having children has made it all so much worse for me. Predominately I worry about accidents or violent crimes. I don't worry about theft. They can have everything I own.

I hadn't heard of "bumping". This fear won't plaque me as long as they don't break in while I'm home.

By and large, I agree with you. But, um, while you're watching the lovely lightning, would you mind taking a moment to step *out* of that puddle?

Blaznfyre,
I suppose bumping the lock is better than smashing in the door. And I know the media does it on purpose. If it isn't sensational, it isn't newsworthy. And nothing sells like fear.

Shandi,
I'm with you. I'd freak if someone broke in while I was sleeping. But then again I wouldn't be thrilled by someone trashing my house while I was away, either.