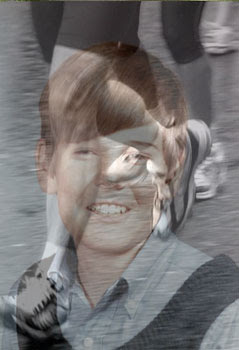 I am a walking man. I am not a running man. I do not enjoy jogging. I do not think it is a physical limitation. I will walk on a tread mill or elliptical machine for an hour, but I can never bring myself to run. I do not like to run. The only reason I have ever embraced for running is if someone is chasing me.

I may have liked to run when I was a kid. I remember dashing around the playground. But when I hit 7th grade I learned to hate running. It was Mr. Ackley and 7th grade P.E. that was the straw that broke this running camel’s back.

Mr. Ackley had been a mediocre jock in college. And like most mediocre jocks with miniscule brains, he majored in physical education. When he realized he was never going to turn pro, he took his jock degree and became a junior high P.E. teacher. And because he was bitter about his own failure, he took it out on the 12 and 13 year old puberty bound boys in his P.E. classes.

P.E. was traumatic to me on more than one level. The first challenge for me was that you were required to take gang showers in the locker room. I was a shy kid who grew up in a family where nudity was a private thing. Stripping down in front of 20 or 30 kids was humiliating to me, especially at age 12.

The other challenge was P.E. itself. I have never been a natural athlete. I would always try hard at sports, but I just didn’t have that raw talent that some boys had for hitting balls, throwing footballs or making jump shots. I even sucked at tether ball. Mr. Ackley looked at boys like me with the ultimate disdain.

Mr. Ackley had this rule: the last kid out of the locker room to get to the gym for role call had to run two cross country laps once we went outside. A cross country was once around the play field and then a lap around the school’s outside track. Every one in class had to run one cross country. I dreaded them. I developed a phobia about running cross country laps. I thought I would be coughing up blood by the end of them. And I was usually dead last in finishing them. I’d get berated by Ackley or his assistant every time.

It got to be mini phobia of mine that I would be last out of the locker room and have to run double laps. I started wearing sweater vests so I could unbutton my shirt in the class before PE and strip quickly. It didn’t help that I had this English class right before PE with a teacher who wouldn’t let us leave until she dismissed us regardless of whether the bell had rang or not.

I was never the last person out of the locker room, but sometimes Ackley would punish the whole class for some infraction and we’d all have to run double laps. Instead of enjoying running as exercise, I learned to hate it as humiliating punishment. Thanks Mr. Ackley. You were a great role model.

I am a walking man too!
Jogging takes up to much energy and the huffing and puffing sweat and the tears is just not on.
Besides that the running shoes last longer.

I've never understood the concept of getting past the pain. Huhh?

I was a running girl once. It was the only sport I was good at. Came from my brother constantly chasing me. I was competing in the mile run when I was in the 8th grade. I was on the last lap when my windpipe closed. I collapsed on the track. When I was finally up and around again, the coach made me walk the last lap so that I wouldn't feel like a failure and I could get past the humiliation. I never got over the fear. I never ran again.

I hated PE and I would always wag that lesson. I don't think the teachers even realised I was in their class because I just never turned up. I sucked at all team sports but I was actually a good runner and swimmer.

The school as a whole had to do a cross country run for 3 miles once and I finished in the first 20 or so. I didn't get up for 30 minutes but I did finish. That was a very long time ago, I can't even run across the street these days.

I stopped running when I hit puberty.
Running with large breasts hurts like hell!
Swimming was my sport ....backstroke.

Like Isabella, as soon as I was in High School, I ditched PE on a regular basis.
For some reason, the teachers must have thought I was there, or they didn't care because I had all my PE credits for graduation.
Suckers!

Steve, Always the practical one, aren't you?

Hayden, I could never find the zone, either. I did puke once in high school PE after a long run, though.

Shandi,
The sad thing is that there was nothing for you to feel humilated about. Our bodies let us know our limits naturally.

Isabella,
It is too bad they treated PE like bootcamp instead of recreation. I think more people would have learned to enjoy exercise.

Blaznfyre,
I am still trying to find a response to your second sentence :)

I'm a walking gal & for many of the same reasons you wrote about. Still have PTSD from those humiliating P.E. moments. I think there's a special place in hell for some of those P.E. teachers. ~JP

JP,
Unless you were a jock, PE seems to be a universally despised experience.

Kristy,
Spoken like a former English teacher, but eloquently.

I used to hate jogging. Now I love it and even crave it at times. Perhaps it's the masochist in me. ;)

Anna, If you love to jog and you are a masochist, I would think you would deprive yourself by walking instead :)