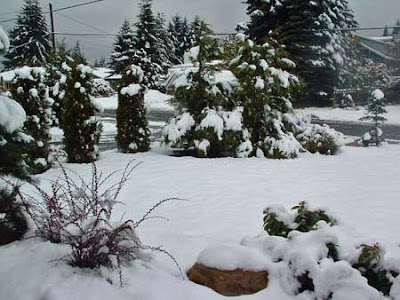 It snowed here in Edmonds, Washington on April 18. This is wrong in so many ways. A week ago I was mowing the lawn in 78 degree weather without a cloud in the sky. I'd say our weather is officially screwy.

I know that the theory of global warming doesn't mean we'll all get tropical temperatures and a tan. I understand at some level that melting ice caps dump freezing waters into warmer waters which in turn cool the air and create colder temperatures in some areas that weren't used to it.

I suppose the good thing is that when it snows here, people drive less which reduces the emissions that create the greenhouse effect and cause global warming.

today on another post someone bitched about unseasonably cold weather - then reported what was handwritten on the wallpaper in an upstairs room "April 28, 1958. Snow."

Hayden,
Good one. I'd be fine if it only snowed in April every 50 years.