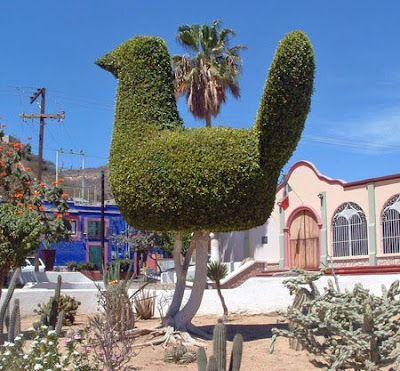 I have always been fond of random things. Mexico is a good place for random things. I have learned not to question what most Gringos might label as illogical when visiting Mexico. After all, we are the ones paying thousands of dollars to invade their coastal towns to fry our skin while we snap picture after picture of anything that moves or doesn't move.


There isn't much to be proud of when you are an American tourist in Mexico. They are loud, obnoxious and definitely ugly. They haggle over everything and even try to talk the poor little girls selling Chicklets down on their price. I think the t-shirt vendors have the right idea when dealing with American tourists. They let themselves be talked down to three shirts for $10 smug in the fact that they are still making a $9 dollar profit and the shirts will shrink so much after the first washing that only the family miniature poodle will be able to squeeze into it (if the poodle will be caught dead in a "One tequila, two tequila, three tequila, floor" t-shirt).

But I digress. I snapped the photo above while frying my skin in the town square of Cabo San Lucas. We'd paid a kid to cart us into town with his bicycle. It is the Mexican version of a rick shaw. He charged us $10. A cab would have only cost of $6. I am a shrewd man with money while on vacation.

Anyway, the town square contains a gazebo, the carcass of a dead whale and this bush trimmed to look like a chicken or dove or some kind of bird. I think it was quite clever actually. So I did what all Americans do. I took a picture of it. Tess refused to pose by it. EM ignored it completely. She is not old enough to appreciate art.

The real highlight of Cabo is a visit at 10 a.m. (on a Sunday no less) to Cabo Wabo for my traditional shot of Cabo Wabo tequila. I'll download the video later. This was our third visit to Cabo Wabo. It is a night club owned by aged rocker Sammy Hagar famous for his hit song, "I can't drive 55." He should put out a new song called, "I can't afford to drive 55." Anyway, the place is famous for some reason for Cabo Wabo tequila and t-shirts.

Oh, we also stopped at Hard Rock for a traditional Mexican lunch before catching a cab back to the dock and our tender for the cruise ship. I never knew hamburgers and potato skins were a Mexican dish. But now I have a Hard Rock shot glass from Cabo to prove I've been there.

Our final stop was the market at the cruise terminal where I'm sure you can really get the best prices. I bought a larger silver chain and a hat that says Cabo San Lucas (and Pacifico Beer). The chain really looks cool when I'm doing my Al Pacino impression from the movie Scarface.

That about sums up our trip to Cabo. I love cultural experiences.
Posted by Time at 10:00 AM