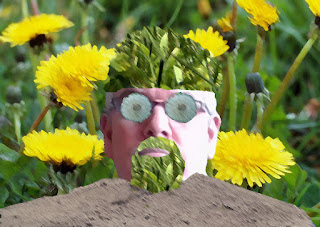 Growing up, some of the chores I was required to do around the house included mowing lawn and weeding. Most of the weeding involved digging dandelions out of the grass. I didn't mind the weeding so much when it was in the vegetable garden, because I enjoyed planting things and nurturing them until they were grown plants. My favorites were corn and pumpkins.

I didn't like digging out dandelions because everyone who deals with weeds knows you pretty much have to get most of the root of a weed or it will simply grow back. Dandelions have huge tap roots that extend a remarkable depth into the soil. And our lawn was pretty dry most of the time, so getting a dandelion out with its tap root was near impossible for me. So I cheated and pulled the top part of the dandelion out so at least there was the appearance of being successful.

I also didn't much care for mowing the lawn because we had this old gas mower that was extremely temperamental and required cleaning spark plugs and messing with a choke. I don't do well with combustion engines, especially when there is a choke involved. Come to think of it, I don't even know what a choke is or does. But it could mean the difference between a gas mower starting and staying started.

I also didn't like mowing lawn as a kid because we had dogs. and inevitably you'd mow over dog crap. And in the summer heat, the smell of dog crap being mowed over just about made me toss my cookies.


When I finally left home, I didn't have to deal with yard work for several years because I lived in dorms and apartments. When I finally did get my own house, I found myself faced with the specter of mowing lawns and weeding again. And in my own early days of home ownership I ended up with a gas mower that a co-worker's father no longer used. I struggled with it for several years and then broke down and bought an electric mower.  So I no longer had to worry about what a choke was or did.

My first house didn't have much in the way of plants except for rhododendrons.  I think they are my least favorite flowering plant. They only bloom about two weeks out of the year. Old ones get out of control and require quite a bit of trimming (which I discovered wasn't one of my skill sets). Other than that, you don't have to do much with them (unless you are one of those freaks who thinks you need to pinch off the dead flower buds after the plants stop blooming).

My second house was brand new and so was the landscaping. It had a fairly large yard to mow, but the shrubs and trees around it simply required throwing down some beauty bark a couple of times a year. There weren't a lot of weeds.

The house I live in now makes up for the years I didn't have to pull many weeds. It doesn't have much yard to mow, but as I've posted about for many years, it does have a wild slope that goes down to a creek. And every year I battle with every known weed to man just to keep the wilderness from creeping up and over our house.

Over the weekend, I both mowed our lawn and pulled weeds. I also climbed up on the roof of the shed that was built at the bottom of the slope behind our house, as a gardening shed when the then owners had grand plans for landscaping the slope. The roof of the shed was being taken over by moss and fallen tree branches. And the persistent tentacles of blackberries were also creep up on it. I clean off as much moss as is humanly possible without using chemicals.

I spent the rest of the morning weeding the steps that lead down the slope to the shed. Weeding is mindless work that ranks right up there with making the bed as a futile activity. But for whatever reason, I have begun to find such work therapeutic. It is so unlike the white collar work I do for a living.  It is honest, hard work.

My journey into genealogy has revealed that almost all of my relatives have been poor, dirt farmers. So I believe genetically I do things like weeding, pruning and planting second nature (if not well).  I laugh at what my ancestors would think of me, though. They would especially have been shaking their heads when they saw me pay a local farmer to help him do chores on his farm where he raises beef cattle and a few chickens. I also took well to using a pitch fork to toss hay to cows. I don't, however, have the nature to send the cows to their final destination.  The farm stay did put me off eating beef.

All of this kind of feeds into my ponderings of what I'll do when I retire (which is still about seven years off). I'd say yard work could keep me busy for much of the time, but the reality of what my body can continue to do as I age will factor into it.

I imagine I will still be blogging. I fear many of my posts will be similar to this one -- mundane records of minutia of my life. But at least there will be a record of sorts that I've been here other than a listing on census records like my relatives.

Oh, and there will be my Elvis Christmas ornament collection. Hopefully that will live on after me.

And there will be plenty of dirt and weeds.
Posted by Time at 10:02 AM