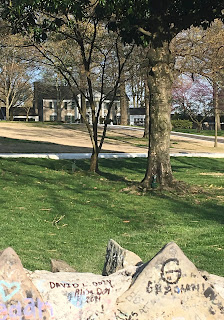 I have spent years denying that I am a hard core Elvis fan. This is despite years of posting on a blog called Dizgraceland and a having a past where I went by the name Tim-Elvis for a lark. And I protested that I wasn't an Elvis fan despite a pilgrimage to Las Vegas to visit spots where Elvis had been including Landmark Drugs where he had his prescriptions filled. 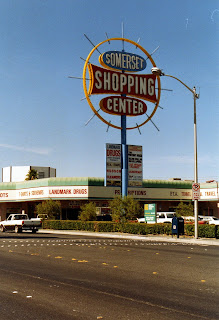 I suppose not everyone has an Elvis tree every year with a miniature Graceland at it's base.  And there is the bookcase chock full of just about every book ever written about the man. Okay and there is that complete collection of Elvis liquor decanters depicting the various stages of his life.

But the one thing that I felt separated me from the rest of the Elvis followers was that I'd never been to Graceland. Oh, I'd passed through the Memphis airport a couple of times, but I never had visited the holiest of all holy sights to those inflicted by King worship.

I stopped being able to claim that distinction when my wife surprised me last year on my birthday with a trip to Memphis to visit Graceland. And I'll be the first one to admit that I was pretty awestruck to take the VIP tour of the mansion and the museums across the street, marveling at the cars, memorabilia and minutia that are on display highlighting his short life.

And let's not forget the feeling of visiting the Meditation Gardens and the King's grave.

It was kind of a once in a lifetime experience that I thought I'd never repeat. And then low and behold circumstances led me and my family back to Memphis again this year and another trip to Graceland. And on this trip I also added a road trip to Tupelo to visit the birthplace of Elvis.

So I've pretty much run out of excuses for my fascination with the King.

But you have to overlook a lot to be an Elvis fan. And Graceland and the Elvis museums do overlook a great deal. There's a lot said about the legend of the poor boy going from poverty to riches overnight and changing the face of the American music scene. There's not much said about Elvis not ever writing any of his own music or kind of hijacking or co-opting much of his style from the black culture either intentionally or unintentionally.

And I don't think you find a single mention of drugs or how Elvis died in any of the Graceland museums. There's also nothing about Priscilla being 14 years old when he became obsessed with her and talked her family into letting her move to Memphis to be with him. And although there's lots of hype about the 68 Comeback Special reviving his singing career, his terrible movie career is pretty much glossed over.

I didn't see a single photo of fat Elvis in any of the displays either. 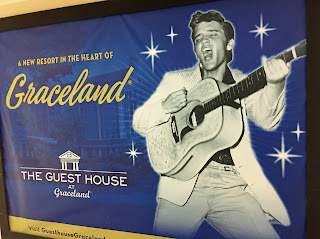 But it makes sense. Elvis isn't about Elvis Presley the man. Elvis is about Elvis the myth. And it is pretty amazing what that myth became after he died. Though I wondered as we sat in the lobby lounge of the Guest House at Graceland hotel and watched the hordes of aged Elvis fans clutching overpriced cocktails and singing along to the Elvis cover musicians cranking out Elvis tunes. My kids know who Elvis is because they help me decorate the Elvis Tree every Christmas. But my daughter has pointed out that none of the other sixth graders in her class have a clue who he was or is.

So you have to wonder how Elvis, the big business, can keep the excitement alive after my generation has died out. 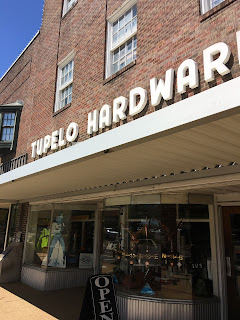 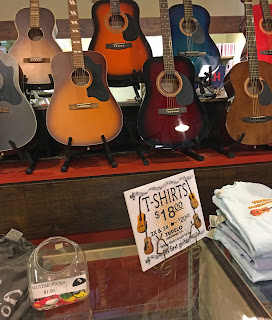 But still, it is amazing how much of the legend lives on, especially in Tennessee and Mississippi. Our trip to Tupelo, Mississippi took us to Tupelo Hardware where Elvis bought his first guitar. 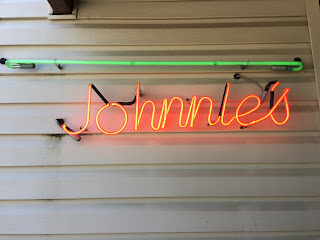 Then there was a stop at Johnnie's Diner to sit in the same booth Elvis sat in on one of his return visits to Tupelo after he became famous. 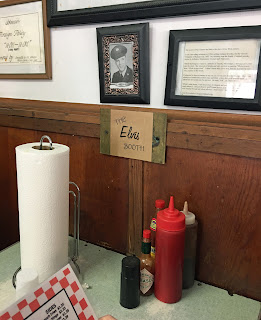 It dawned on me that no one would ever put up a plaque that read "The Tim Booth" in any restaurant I've ever dined at. Can you imagine what that must have been like for Elvis when he was alive? 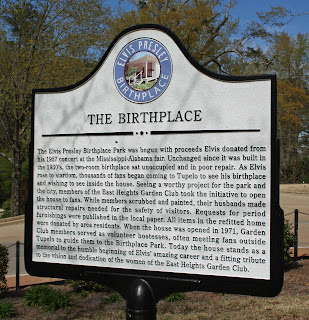 After Jonnie's Diner it was off to the birthplace of Elvis to see the house he was born in. That included a presentation in the Pentecostal Church he used to attend that was moved to the park where his birth house is. 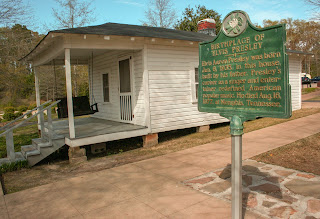 The tour of his actual house took about a minute since it has only two rooms. And although the structure is the house he was born in, none of the furnishings were original. It reminded me of the house in Washington D.C. that is across from Ford Theater where Lincoln was shot. The tour guide pointed out that, although it was the actual room Lincoln was brought to after he was shot, nothing in the room was the same as when Lincoln was brought to. 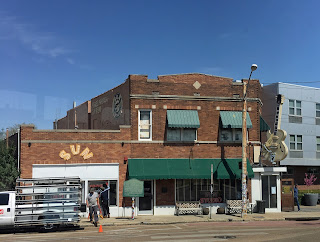 Still we snap photos of it all and marvel that we are in the same spot as a famous person.  On the Sun Studio tour they take you to the basement studio where Elvis, Scotty Moore and Bill Black recorded the fateful That's Alright Momma that sealed Elvis' fate. There are taped "x's" on the floor where the three stood. 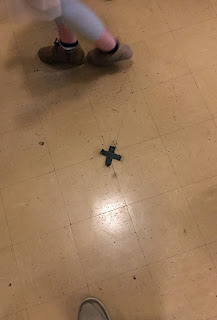 The tour ends with the tour guide pulling out a microphone that they swear was one of the ones Elvis used. The tour guide has to caution people not to kiss or lick it because any Ju-Ju that Elvis left with the mike has long since faded into the ether. 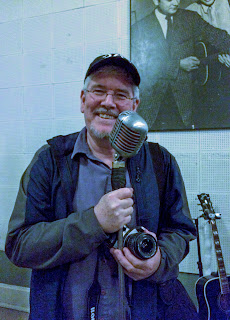 We took a musical bus tour of Memphis that included a stop at Overton Park and Levitt Shell where Elvis played his first concert opening for Slim Whitman in 1954. 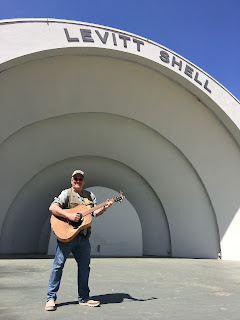 I can't say that I felt Elvis' presence when I shuffled through Graceland with the rest of the pilgrims. And I kind of pray that Elvis' spirit never could come back because I imagine he would be appalled at all of these people filing through his house snapping photos of ash trays and microwaves. 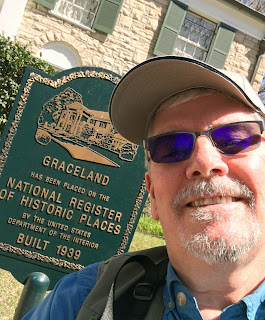 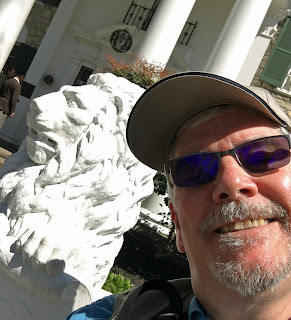 Though I do wish I could visit the second floor of Graceland. They don't allow anyone on the second floor and I pretty much bet that is really where everyone wants to go. It is where Elvis' bedroom was and the bathroom that he died in.  Visiting that space would pretty much bring you full circle on the pilgrimage after visiting his birthplace in Tupelo. 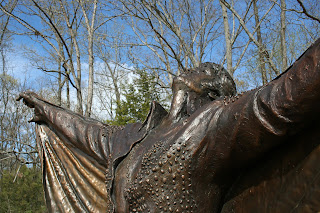 But you can visit the Mediation Gardens and the graves of Elvis and his parents. A woman with a walker stood before his grave and said, "I love you Elvis, I'll see you soon in heaven." 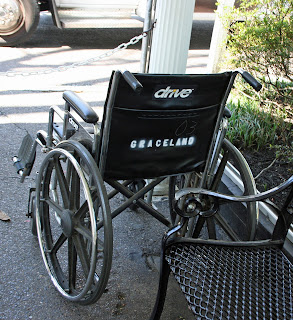 I couldn't help but think she must have signed up for the VIP VIP tour if she was going to see Elvis in heaven. 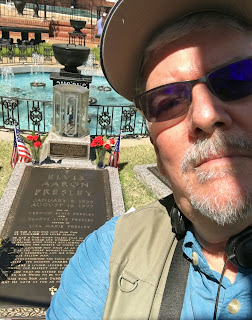 My family and I signed the walls outside of Graceland as is the custom. 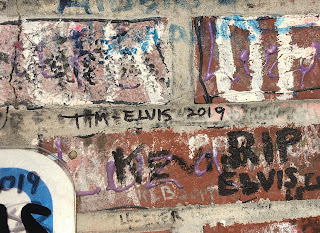 Once again it struck me that Elvis is akin to a religion and we are sending messages to him in much the same ways other religions do through prayers and lighting candles. And as with all religions, I don't really think anyone reads, hears or acknowledges the messages or prayers. 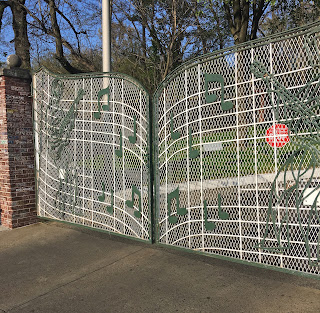 It was raining when we left Memphis. And to misquote Mark Cohn's Walking in Memphis: 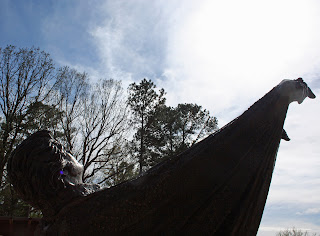