Walk into the night 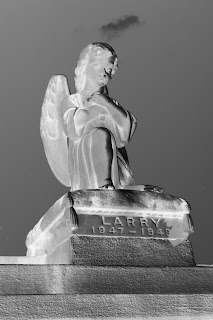 I think we should replace all of the existing euphemisms we use for death with the simple phrase, "walk into the night." It sounds so much better than "passed on," "kicked the bucket" (which makes no sense anyway), "bought the farm" (also senseless), "croaked," "departed," "called home" (which happens to mean a lot when one of my kids is sick), "no longer with us" (which is something we also say after someone in the office is fired), "with the angels," "gave up the ghost," "left this mortal coil," "went belly up," "cashed in," "bought a pine condo," "cashed in," "is pushing up daisies," or "crossed over."

"Walk into the night," sounds gentle like slipping into a slumber. And it sounds so much better than "walk into the light," with its connotation of harsh light. I would rather slip softly into darkness, like the embrace of an old friend.

It also sounds better than, "What happened to Fred?"
"Fred's dead."
"Oh, what's for dinner?

Instead, "What happened to Fred?"
"He walked into the night."
"Oh, that sounds nice."

Not that I spend a lot of time thinking about euphemisms for death. I did briefly when I was with my mother when she died. None of the euphemisms seemed appropriate. I was there. She didn't pass on or get called home. She died.

I didn't think much about it when my father died 21 years before that. I wasn't with him. So it was less that he died and more that he wasn't there any more. It's a subtle distinction, but you'd understand it if you'd experienced it.

We tend to say we are putting pets to sleep when we have them euthanized. And in fact the vets do put them to sleep before they kill them with a lethal injection. Hopefully it insures that they aren't suffering. But it is a sleep they never wake from.

Sort of like walking into the night.
Posted by Time at 9:08 AM