I'm being followed by a moon shadow 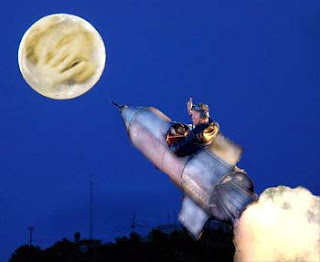 I watched the biopic First Man over the weekend. Actually I finished watching it. I started watching it on the airplane flying back from Memphis at the beginning of the month. First Man is the story of Neil Armstrong's journey to become the first man to set foot on the moon. Ryan Gosling plays Neil Armstrong.

Ryan Gosling plays a very unemotional Neil Armstrong. Which is, I guess from what I've read about him, was basically true. There aren't many overly emotional test pilots and astronauts. Though it would have been kind of fun to see him take his first step on the moon and say, "That's one small step for man, one giant leap for mankind...Whoooee...momma, I'm on the moon MoFo's!"

I was 11-years old when Armstrong walked on the moon (followed by Buzz Aldrin who apparently no one in the astronaut program particularly liked). I'd followed the space program since its inception and wanted to be an astronaut when I was a kid and didn't know it would involve lots of math and having good eyesight.

I was obsessed with Apollo 11. I have a box somewhere buried in a trunk that contains newspaper clippings and other memorabilia from the time. I even have a bronze medallion with the Apollo 11 mission theme that I wore to school around my neck until school bully John Zior knocked it off me on the playground.

The movie talks a bit about the controversy over the amount of money NASA was spending to get a man to the moon. Lots of talk about how much good they could have done with that money on earth. But as a kid, I thought it was worth every penny. I would think the same thing today, especially since Trump wants to spend more than it cost to go to the moon on a stupid wall.

And don't get me started on how much the U.S. spends on the military. 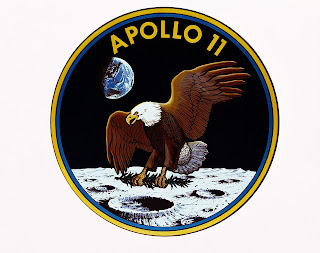 It was interesting that the television show Star Trek came out three years before the moon mission and every one seemed to relate to its mission to explore new worlds and boldly go where no man has gone before. Though the show was cancelled in the same year as Armstrong walked on the moon.

The movie doesn't romanticize the moon mission. It does play up the psychological affect on the astronauts and their families. They were all pretty much prepared to die trying to get to the moon or die trying to get back to earth.

To me, even now, I couldn't think of anything greater to do with my life than to be the first person to touch foot on a place that wasn't earth. If the emphasis hadn't shifted away from going to the moon and to space station experiments, we'd probably have a colony up there now and would likely have gone to Mars by now.

For me, the astronauts were true heroes. They inspired me as a child and I still have vivid memories of watching their accomplishments on our black and white television and having dreams of changing the world the way they were.

And even if all the money used to get to moon had been cut off and diverted to Congress to reallocate it, I can bet not a penny would have made it into programs to benefit the poor. But at least going to the moon inspired many of us to dream.


"To the moon, Alice."
Ralph Kramden (Jackie Gleason), the Honeymooners