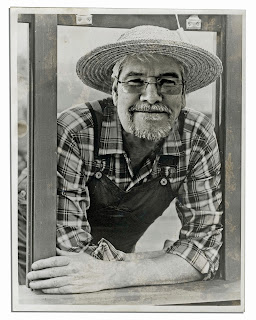 You have to be a certain age now to know who Mr. Green Jeans was. He was a supporting character on a children's television program I watched as a child -- Captain Kangaroo. It was on the air from 1955 through 1984.

But this post isn't about Captain Kangaroo or even Mr. Green Jeans. It is about yet another aspect of my life that, although not ever considered as a career path, takes up a great deal of my free time -- gardening. Actually, it is less gardening and more yard work than anything else.

I actually wrote a post back in April called Dirt and weeds, that gave the history of my life pulling weeds. So I won't rehash it here. Suffice it to say, hardly a weekend goes by that I'm not mowing grass, pulling weeds or cutting back some invasive species of plant. And like Mr. Green Jeans, I often wear overalls. Though mine are not green.

The irony is that I wouldn't say I'm particularly good at it. I definitely don't have a green thumb when it comes to planting things. This is the third or fourth year that I've planted pumpkins and I've yet to actually have more than one or two by Halloween.


Weeding seems to be the thing I do the most. Seems like no sooner do I clear a patch of earth of one type of weed, another takes its place. When I moved into our current house, I pulled tons of ivy off from the hillside behind our house. It was replaced by horse tails. They remain, no not as thick. But they have been edged out by bindweed that seems to be in the morning glory family.

A bindweed is a vine that isn't as thick and durable as ivy nor as wicked as blackberries. But it is persistent. The thing about them is the reproduce quickly and climb and creep over shrubs, trees and fences at an alarming rate. And they have these roots that are sometimes as long as the plants themselves. You can't just pull off the morning glory. You have to, as with all weeds, get the roots. And that is the root of the problem.

What I've read is that the only way to get rid of bindweed is to keep digging it out until you wear out the plants resources to regenerate.

Something tells me I may well wear out before the bindweed does.

The thing is, I don't really like dealing with bindweed or ivy or horse tails. The fact that I know what they are doesn't make me feel knowledgeable just weary. I don't take any great satisfaction from pulling weeds. In fact after weeding half a block of soil that is just outside our fence, I asked my son how he thought it looked. He told me he didn't notice and difference.

If we ever move out of this house, the next house we buy won't have a lawn to take care of or anything that appears to invite me to spend the weekends pulling weeds.
Posted by Time at 8:00 AM