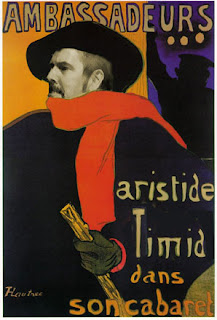 There was a time that I toyed with majoring in art and becoming an artist instead of a writer. I suppose I ended up being a writer because I wasn't certain how you actually could support yourself being an artist.

Not that you can support yourself being a writer unless you followed the meandering career path I did and became a copywriter and then a marketing person. Growing up in a relatively poor family instilled in me the desire to be gainfully employed. Being an artist or an artistic writer doesn't lend itself to gainful employment. The term, "starving artist" wasn't created for nothing.

Over the years I've known a few artists. And none of them were able to support themselves strictly through their art. And as I've said, I only supported myself through writing by writing what other people wanted me to write. This blog is the perfect illustration of what happens when you simply write for yourself.  No one reads what you've written and certainly no one pays you to read what you've written.

But even the writers who have a certain amount of success have done so by selling out. I follow one of my favorite current authors, Garth Stein, on social media and the guy always seems to be hawking himself like literary snake oil. His most famous book, The art of racing in the rain, has just been released as a movie and Stein is still marketing himself.

So I'm starting to think that true art isn't commercially successful. Or at least it isn't successful when you are producing it. Case in point Vincent Van Gogh.


I wonder at times what my life would have been like if I had majored in art instead of Journalism. I likely would have become a graphic artist (the profession many artists pursue instead of fine art when they want to get a job that doesn't involve taking coffee orders).

You have seen by my many Photoshop efforts that I still fancy myself an artist of sorts. I create personalized greeting cards for my family using Photoshop. I think they are pretty good. Though my family seems to have grown tired of them.

That has been my experience with art in general. I create something that gets some attention and then I overdo it. Case in point was my brief foray into painting rocks. After painting a few that were really good, I began to realize that I was falling into a rut and there was really nothing you could do with a painted rock other than hide it like an Easter egg in our downtown and hope someone enjoyed it. But my own family just kind of stopped "ooohing" and "ahhhhhing." So I stopped painting rocks and returned to pulling weeds.

I think I wrote about a similar hobby that I engaged in when I was still in high school. I created salt dough ornaments and sculptures. At first, I was getting a lot of positive feedback about how creative they were. I went so far as creating dough sculptures, mounting them on plaques and giving them away as gifts thinking the recipients were thrilled with my original art. It wasn't until years later on a trip back to Boise that I found one of my artworks in a sale bin at a thrift store. It had been a gift to a former girlfriend's grandmother. 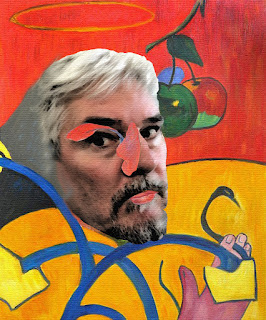 That kind of put everything in perspective for me. When I think people enjoy my art I need to be more aware that most of the time they are being polite and that I may not be as talented or creative as I think I am.

This reminds me of a time that I lived in an apartment in the Queen Anne neighborhood of Seattle.  The apartment was unfortunately located right above the live in land lord's apartment. His name was Jerry. Jerry used to complain a great deal about noise I made typing term papers on my old electric typewriter. The irony was that Jerry played the Lowry Organ. He even gave me a cassette tape of his music once. It began with, "Hey there, Jerry here on the Lowry Organ." That was followed by Jerry playing the organ and singing.

A few years later I was bored and browsing the personal ads in a weekly newspaper. I saw and ad that read, "Free Poems" followed by a phone number. I couldn't resist calling the number. It was recording of a man reading some very bad poetry he'd written. And I swear to god it was Jerry.

My point here is that if you are desperate for people to appreciate your art, you'll likely be as successful as a person desperate for a relationship. People will flock away in hordes. If you produce something you think is art and you are proud of it, leave it at that.

But just bear in mind, thou art what thou art through art.