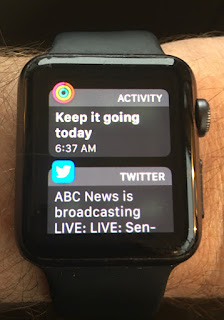 I do. I really do love technology.  But I question it at times.

For example I am a bit baffled when my Apple Watch reminds me to stand to achieve my daily goal of standing up. I wouldn't have understood the importance of standing up a few years ago. But once you hit 60 it seems more like a reasonable goal.

The thing that really baffles me, however, is that I can ignore my watches reminder to stand up and then 10-minutes later it will congratulate me for achieving my stand up goal despite the fact that I have remained sitting.

The watch does the same thing with my daily move goal (and by move it is not referring to exercise, but to simply not remaining comatose). I can be sitting in a meeting and the watch starts heaving platitudes to me for achieving my move goal even though I've been sitting at a table for an hour.

I wear my Apple watch while I do my daily hour of elliptical exercising. But even after an hour working out the watch sometimes chides me to do a brisk ten-minute walk to achieve my daily exercise goal.

I also love Amazon's Alexa and my Echo devices, but Alexa can be a bit troublesome at times. Because every time my 12-year old daughter asks for some music like say, "Alexa, play the soundtrack from Disney's Descendents 3" Alexa will respond with, "Playing Fat Daddy's Get Bent album three." And of course the songs Alexa misunderstands and plays all have explicit lyrics.


My watch just congratulated me on achieving my move goal and I've been sitting here for 20 minutes typing this post. Maybe it admires my typing speed.

Don't get me wrong, I appreciate how far we've come with our devices. I would be lost without my phone (literally without its GPS function). But I wonder at times whether we depend too much on it. I mean really, do I need to ask Alexa to pause the video I am watching when the remote is literally two inches from my hand?

I just have to sit back and appreciate that I live in the future that used to be just science fiction when I was a kid. But at least back then no one had to remind me to stand up or move.