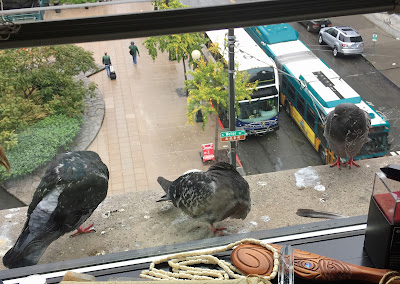 Apparently the ledge outside my new office is quite the gathering place for pigeons and occasionally sea gulls. It is on the fourth floor of my building. My other office was on the 8th floor of another building and only attracted a sea gull on rare occasions.

There are now four pigeons on the window ledge....wait...five. Two are staring at me rather balefully. The other three appear to be sleeping.

This is dramatic stuff. I'm thinking of setting up a web cam and streaming it live. I'll call it For the birds. Apparently that phrase comes from the 1940s and was originally "That's shit for the birds" referring to birds pecking on horse manure for seeds.

I think calling the web cam "Shit for the birds" might not be a good marketing move. Come to think of it, probably not a big demand anyway for a web cam of pigeons on my window ledge. There are three of them now, BTW. I'm thinking they are hanging out because of the rain. It's hard to tell with pigeons. They always look a bit confused.

I suppose I'd be a bit confused if my eyes were on the side of my head. What is that all about anyway? What genius genetic designer thought it would be a good idea to put birds eyes on the side of their heads? They can't have any depth perception. I'm surprised they aren't flying into shit all the time.

Then it would really be shit for the birds.
Posted by Time at 10:10 AM