Once more into the windmill 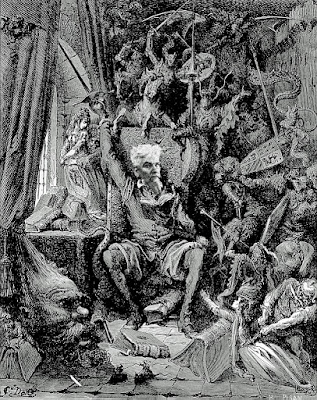 Of course, he carried it a bit too far. He thought that every windmill was a giant. That's insane. But, thinking that they might be... Well, all the best minds used to think the world was flat. But, what if it isn't? It might be round. And bread mold might be medicine. If we never looked at things and thought of what they might be, why, we'd all still be out there in the tall grass with the apes.

--Justin Playfair (George C. Scott) in the movie They Might be Giants

I have been fascinated with Don Quixote for years. I had the above poster (sans my head) in my dorm room in college. And this isn't the first post I've written about him. I think the first was back in 2006 called Windmills or giants. 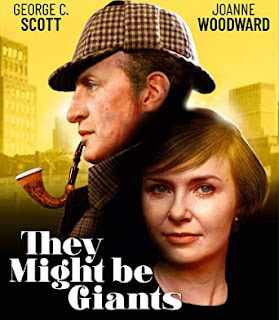 It was the movie They Might be Giants, that peaked my interest in Don Quixote. It is a 1971 film starring George C. Scott and Joanne Woodward. Scott plays a mentally ill man who thinks he is Sherlock Holmes. Woodward plays a psychiatrist named Watson. The best part of film is the above quote by the main character explaining to a certain extent why he believed he was Holmes and was trying to find Moriarty, his arch nemesis. He chased Moriarty for the same reason Don Quixote fought with windmills, because they might be giants.

It is concept that has inspired me for years. We shouldn't stop doing what we believe in just because other think it is pointless.