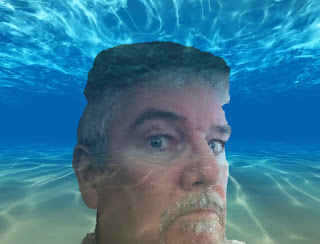 Despite all of my whining about being increasingly more invisible as I age, I have always been a person who didn't really like to draw attention to myself. I guess that is hard to believe when you see me Photoshop my face on just about everything.

But that is my virtual self. In the real world I like flying under the radar.

Sometimes, however, I am forced into making ripples, if not waves.  Case in point, Frontier Cable.  A little over a year ago, I contacted Frontier, the company that provides my television, Internet and telephone services, trying to determine why my bill kept increasing although I wasn't getting anything new.  After literally hours on their customer service chat line, I came away with faster Internet and a monthly bill that was still close to $300 a month.

Last week I finally decided that enough was enough. We have enough streaming services that we use that we don't need cable. So I contacted Frontier again. This time I used the telephone (the chat feature wasn't available...apparently because it is too easy to keep a written record). The first person I reached was a young woman named Amber. I asked her what my bill would be if I cancelled cable and just had phone and Internet. She seemed a bit confused, but told me it would go from $294 to $88 plus tax.  I said, "Okay, I want to cancel my cable."

Amber of course couldn't do that. She needed to transfer me to Robin who apparently had that super power. When I talked to Robin, she informed me that cancelling my cable would increase the cost of my telephone and Internet because I wouldn't have the discount of a triple play plan. I told her Amber had quoted me $88. Robin laughed. She suggested I just reduce cable to basic programming (something I had asked for a year ago). Then the prices would be $124 plus tax. If I cancelled cable and kept telephone and Internet, the price would be $144 plus tax.

I said okay, then give me basic cable.  After about ten minutes of typing and apologizing for a slow computer (I assume they have Frontier Internet), Robin gave me a confirmation number and said I'd receive an e-mail confirmation as well.


Later that day, my wife forwarded me an e-mail she'd received from Frontier outlining the change. I couldn't figure out why she'd received the e-mail instead of me.  But on the confirmation she pointed out that it looked like they had reduced out Internet speed. It also said the cost plus tax would be $164.

So I called Frontier once again and spoke with David. He apologized and said he would give me even higher Internet speed, the basic cable and telephone for $109. I was wary. But he gave me another confirmation number and said I'd receive an e-mail. I told him the last email had gone to my wife. He didn't know why.

I never did receive another e-mail confirming. But I did receive and e-mail telling me how to set up our new voice mail.  I figured it was an automatic e-mail and we didn't need to do anything. But a day or so later my wife realized people were calling and nothing was going to voice mail. I tried setting it up according to the e-mail instructions, but it wouldn't accept the pass code.

So once again I called Frontier and spoke to a tech named Jennifer. She said customer service had cancelled our voice mail and transferred me to them. Yet another rep told me that she could reinstate my voice mail but it would cost $8 per month. I said okay. I asked if I needed a new passcode and she said no.

The next day someone left us a voicemail but we couldn't access it with any of the passcodes old or new. So I called Frontier yet again and asked they simply cancel the voice mail and we'd use our answering machine. I confirmed that I wouldn't be charged $8 a month for voice mail and she informed me that it should have been free anyway.

At that point I just thanked her and hope that I don't have to call them until next year when my triple play discounts expire.