I'm afraid the whole cheese thing is coming to a head (and not just mine). I think it is starting to grate on people's nerves. But before the cheese slips off my cracker for the last time I just had to point out something really weird I recalled -- I've actually been to a cheese factory.

Okay, I know it is startling, but about three years ago, Tess and I took a trip to the Oregon Coast and stopped at the Tillamook Cheese Factory in, oddly enough, Tillamook, Oregon. If you aren't from the Pacific Northwest then you probably have never heard of Tillamook cheese, but let me just tell you it is pretty darned good. And if the truth were to be told, this is the second time Tess and I have stopped at the factory because, although we've never seen anyone at the factory actually make cheese, they do give out pretty good samples. Plus you can get really fresh cheese curds in their gift shop.

Anyway, I was sifting through some photos from that trip and I ran across a couple of photos I took outside the factory. And low and behold I saw this really odd anomaly in the first photo: 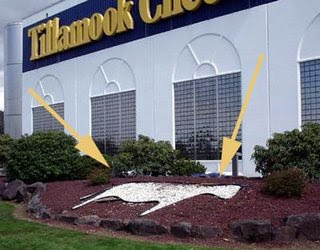 Yes, that is the outline of a dairy cow distinctly etched out of beauty bark next to the cheese factory. I mean, I think this is like one of those weird crop circle type things which would lead me to believe that maybe something else is going on in that factory. It could be one of those beacons to signal extra terrestrials or something.

Now look at the second photo of a replica ship that is next to the factory: 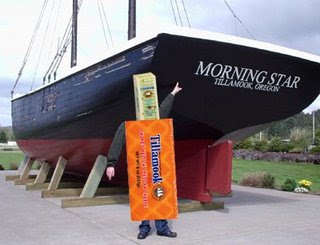 Ignore the blocks of Tillamook cheese standing and pointing at the ship. That is just me (I really like their smoked cheddar). But look at the name of the ship. Yes, "Morning Star." And "morningstar" occasionally comments on my blog (rarely on topic, but she comments nonetheless). Isn't that weird?

You just never know where cheese will take you.
Posted by Time at 12:29 PM

I've seen that cheese in Vons. I've even had some of the smoked chedder. God, that's weird. That crop circle is amazing. You are so fortunate to come across these anomolies Tim. I also experienced a deja vu sensation when you mentioned cheese curds. Wow!

I am perplexed. Cheese comes from milk. If they can make buffalo cheese, why hasn't someone made human cheese (from breastmilk).

Shandi,
Cheese curds do come back and haunt you on occasion. And thanks for clarifying that human cheese would be made from breast milk. But I imagine that somewhere, somehow it has been done. I am not, however, going to do a Google search for it. I'll let you do that investigative work, but I'd suggest doing at home. :)

Hmmm a cheese factory??? I have been to the Cheesecake Factory that was pretty cool. So how much longer until you start with the clever pictures again??? I am in deep withdraw! I have to keep checking your old posts!!

Either way it's pretty funny.

Aww, c'mon man, don't kill off cheese week. You've only got two days left. Heck, you could get away with only one more installment and call friday the start of an early weekend.

Or not. Either way I have come to a greater appreciation of the proud and noble cheese and I regret my previous ambivalence to our moldy pals from the very tasty dairy food group.

ummmmm does this mean i have "made it"??? i have my 15 minutes of fame?? being pictured on Tim ID's blog??? i am sooooo flattered i don't know what to say..... my heart is all a flutter.. even if the spelling of my name was wrong.. no capital M and it is all one word..... i made it !! i have arrived !!! YIPEEEEEEEEE.. after all these weeks/months of reading Tim ID's blog... after all these weeks / months of commenting off topic - just to be noticed..

morningstar - feeling rather proud of her accomplishment!

Lights, You may be right. Cheese shouldn't be cheated out of it's week. Though technically it isn't really cheese week. It's I'M NOT GOING TO PHOTOSHOP MY FACE ON ANYTHING WEEK.

I realize your identity isn't capitalized and is one word. But the replica ship was called "Morning Star." It is a real ship that was built by settlers near Tillamook Bay out of shipwrecked ship parts to ship farm goods and dairy products to market.

But this shouldn't take away from me recognizing your contribution to my little corner of the blog world. It was also a blatant way to steer you towards being on topic. :)

TIM!!!!! how i wish i could post a little pic on these damn comment sections... trust me if i could it would be a pic of me sticking my tongue out at YOU!! keep me on topic... pfffffffffffffffffft

morningstar, you are more than welcome to e-mail me the photo. Just don't be suprised where it ends up being Photoshopped :)