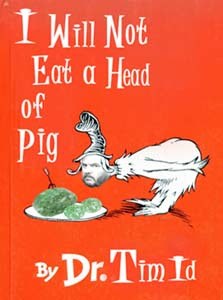 Definition of headcheese: Not a cheese at all, but a sausage made from the meaty bits of the head of a calf or pig (sometimes a sheep or cow) that are seasoned, combined with a gelatinous meat broth and cooked in a mold. When cool, the sausage is unmolded and thinly sliced. It's usually eaten at room temperature."

"First, clean the pig’s head. With the help of a saw and hatchet or cleaver, open the head and remove all passages into the head, nose, ears, etc. It is very unpleasant to run into a stray tooth or long, stiff hair. Be thorough!"
--Recipe for Headcheese from www.askthemeatman.com

Not the head of a calf, nor a sheep or cow
No way, no how, not even a sow
I would not eat a head of pig
I would not like it, it's not my gig.

Not from a mold. Not room temperature or cold.
Not even if it's free. You let me be!
No lips, no spleens, no ears or teeth!
It makes me sick and that's my beef!

I see this stuff in the store sometimes and it is fascinating. So repulsive to look at yet it is in the store so someone is eating it. So do they make sandwiches with it or what? Does it go better with mustard or mayo? Wheat or rye?

Ah, the mystery that is head cheese.

What in the hell is going on around here!?!?

Isn't that your face Photoshopped onto an innocent literary character? I knew you couldn't go a week. Does that mean we get to give you a dare?


Just another Seussian way of looking at it. I have never touched the filty disgusting stuff myself.

Lights, I'm hoping you will get back to me with how one does eat head cheese. I think anything tastes good on a Ritz cracker.

Kristy,
I'm not saying it is my face or isn't my face. It could be my twin brother or some other incredibly handsome man. I wouldn't, however, put Sam I Am in the category of "literary character."

Regardless, I base the length of theme weeks on a complicated formula that involves Fibonacci numbers and Gypsy moths. Thus the NO PHOTOSHOPPED IMAGES OF MY FACE WEEK officially ended yesterday.

Shandi, Shandi, Shandi...you can see where this is headed, don't you. THE Michael will be all over this comment. He probably is still fantasizing about breast milk and human cheese. You bring it on yourself.

Tim: It is not my fault that a man can't look at the words "breast" and "head" without pitch'n a tent.

Besides, innuendo is my thing. Intended or not. :-)

First off, that was brilliant. Second, Lights has every right to sue your ass for so blatently copying his sussian style. Third, I would have thought Shandi LOVED head......oh wait.....I must be "pitchin a tent", whatever the hell that means, and fourth.....fourth....ah.......oh, I place something as disgusting as head cheese in the same category as brocolli, oysters, or anything else that evolution came up with to discourage predation.
So when's Shandi's breast milk cheese tasting? Do we get wine with that?

No wine tasting Michael and I think I'll keep my cheese on my cracker. :-)

BMW??? Hadn't heard that one. Would you mind explaining?

Lights and I think they should change the name of head cheese to something that bears resemblance to it's actual contents considering that it's not cheese at all. We were thinking maybe "coagulated, gelatinous animal carcass drippings and such".

Shandi, BMW (Big Morning Wood)...
And while "coagulated, gelatinous animal carcass drippings and such" is certainly a fine name, it just lacks a certain consumer appeal that we professional marketing people look for in product development. "Head Cheese" on the other hand is something I can work with.

Sorry to do this to you Tim, but.... If I were a guy... and I had head cheese... I don't think it would be something I could deal with. I'm thinking it would require a visit to my doctor for a shot of penicillan. Sorry, but the name is just NOT marketable.

Shandi, I think you are confusing head cheese with Little Richard cheese.

I want to try head cheese just to say I did but I don't want to buy a whole package of it in case I don't like it.

R. Splurge. Life is too short to worry about not liking head cheese.

THE Michael, I realize it is harder to rise to the occasion as we get older but you keep the faith my friend.