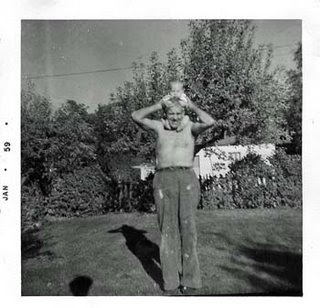 Today is my father's birthday. He was born April 29, 1915. If he was alive, he would be 91. He died 14 years ago, the same year my niece was born. It's how my brother remembers the year my father died. I usually just remember the feelings, not the year.

I think I look like my father. Sometimes I look into the mirror and see his face, especially now that I am middle aged and have gray hair. But I also think I looked like him when I was younger as well. 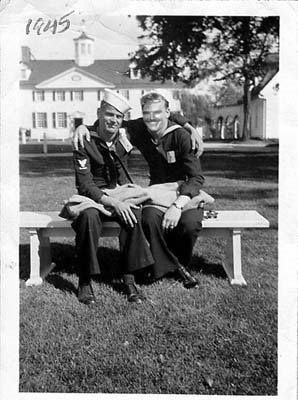 I look like my father, but I don't think I am like my father. It's hard to say. He was a Taurus and very stubborn. I am a Pisces like my mother and I think I am more flexibly stubborn than he was. I have blue eyes and he had brown eyes.

My father did not go to college. He finished high school and ended up joining the Navy as World War II was winding down. I went to college and avoided the military like the plague.

My father dreamt of finding lost treasures. He read True Treasure magazine and he owned a metal detector. He kept hundreds of notebooks full of notes about lost treasures and ghost towns (which my mother tossed after he died). He never really ventured out much to find the treasures. If he had actually discovered a treasure, I think it would have ruined his dreams.

"flexibly stubborn"? Does that mean that you bend/yeild without changing?

Why thank you Hayden. I am a Pisces with Taurus rising. I think that indeed makes me flexibly stubborn (if you put stock in such things). A Pisces is a water sign. A river is a good example of something that is flexibly stubborn. When it encounters rocks, it flows around them as the rock stubbornly sits there (earth sign). It may take years, but the river eventually wears the rock away. :)

It's nice of you to honor your father like this. I like the thought of a huge collection of treasure maps. Makes you wonder what he was interested in more, the searching part or the finding part.

I'm envious of you guys with actual Dads. It must have made a real difference in your lives and I hope you realize how fortunate you are to have had one.

I'm married to a pisces, and yes, she's flexibly stubborn, which actually is a good thing. The alternative would be homicide, hers or mine I would not venture to guess.

As a cancer, I guess you discribe me as hard on the outside, soft on the inside. In my experience, no one cracks a shell better than a pisces......or wears it down, perhaps.

yet another banner today! your creativity amazes me. I pop in every time I get a chance just to see what it looks like. I guess that's the point, you set a trap....you build it, and we come...

Thanks Lights, I'm pretty sure it was the search (getting there is half the fun).

THE Michael, Do you walk sideways, too?

Thanks Hayden, I kind of look at Dizgraceland as my Winchester House. I need to add something to it every day in order for it to stay alive.

I love the new photo in your heading.

Like Michael, I find myself jealous of those who had a father in their life.

I think your father's obsession with treasure is wonderful. I seem to have a similiar obsession. I like to bury my own treasure. Have you heard of geo-casheing?

Thanks Shandi. Let's see how long I can leave it there before I get bored.

The sad thing about my relationship with my father is that I appreciate him more now than I think I did when he was alive. I have all of these questions I'd like to ask, but he's gone.

I've never heard of geo-casheing. What is it?

Geocashing is basically this: people set up caches all over the world and share the locations on the internet. GPS users can then use the location coordinates to find the caches. Once found, a cache may provide the visitor with a wide variety of rewards. All the visitor is asked to do is if they get something they should try to leave something for the cache.

You can look up active cache sites by going to www.geocashing.com

I spent one Saturday finding 3 caches in my area.

That is very interesting to say if he found a treasure it would have ruined his dreams. I enjoy your insight immensely. Happy Birthday to your Dad!

Thanks Cherish, My father has been dead 14 years yet I still learn things about him.