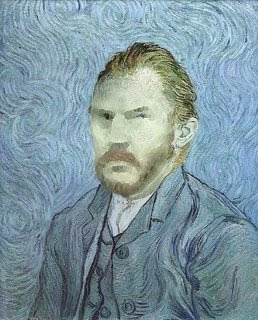 The painting was completed near the mental institution at Saint-Remy 13 months before Van Gogh died. I didn't know that when I flipped to the page in the Child Craft Books where Vincent's painting was. I didn't know anything about him cutting off a portion of his ear to prove his love for a prostitute or his lifelong battle with mental illness. I just loved that painting of a night sky that was alive.

Years ago, I was in London and went to the National Gallery. It had paintings of many of the artists I'd grown to appreciate by flipping through the Child Craft Books. And although they didn't have Van Gogh's Starry Night, they did have a painting he had done of a chair. It sounds weird, but just standing there in front of this painting of a chair, I was close to tears. I am truly convinced that Van Gogh was a genius. Not because I have been told that he is a great painter, but because his work captures something beyond description. The painting of the chair, like his painting of the night sky, was alive.

I've heard stories that Van Gogh would eat his paints to see if their color touched his sense of taste in the same way. Maybe the paint metaphorically became his blood. Ironically, there are some who conjecture that the lead in the paints at the time perhaps contributed to his madness and his genius.

What truly makes Van Gogh great to me was that he painted and painted, not for fame or money, but because he loved and hated painting. Van Gogh was not recognized as a genius until after his death. I believe he only sold one painting while he was alive.

What did this teach me? It taught me to appreciate art that touches me, not art that I should like or that would be a good investment. It also taught me to create for the love of creating, not for fame or fortune. Because as with real stars, the light of genius isn't usually seen until long after the star has burnt out.
Posted by Time at 7:07 PM

Thank you Hayden. Did I mention I've always like you? :)

This is why I love you.

You get it...you are a god among men!

This sucks Tim. I tried to post a comment to your blog twice today. I even had a really long response to this particular post and for some reason it deleted my comment.
Auuuugggghhhh.

I had a great comment too. It was all about how great artists are able to extend periods of passion in order to express themselves. I even did some research on mental illness and creativity. It may also have something to do with drug addiction. It all seems to spin the artist in a passionate mania that typically produces some great works of art.

I once had a guy tell me that artists are selfish. They don't want to part with their works as they consider them to be a part of themselves. They are selfish and afraid of rejection. This might be why they're not discovered till after death.

And... besides all that... so many artists are so arrogant they're kindof annoying. People may wait till after their death to admit how great they are. I took a lot of classes with artists. They're annoying... trust me. I think if I work on becoming more annoying, I might be a better artist.

Mickey,
Thanks my friend, but I think you are the one with insight. Don't forget I did spend a week writing about cheese.

Shandi,
Blogger has been a pain today. Very astute observations on "artists." I often wonder if self-proclaimed artists are not unlike people who call proclaim themselves buddah. Neither should be trusted.

Wonderful and thought provoking post Tim. I do so love the work of Van Gough too and now i'll never look at it the same way again. Thanks.
Hugs,
~gina~

Thanks Gina, you don't think it was too much of an ear full? :)