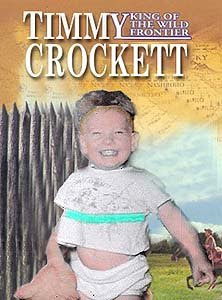 "Born in the mountain state of Idaho
A place with lots of dirt that grows potatoes
Raised in Boise, the City of Trees,
He carried a stuff b'ar until he was thirty-three

The Davy Crockett television movies came out in about 1954 and 1955 and started a coonskin cap craze that apparently hung on awhile (the ironic note to the whole coonskin cap craze was that Davy Crockett actually wore a foxskin cap). I think the one my two-year old self was wearing above actually belonged to my brother Dan. I don't think it was a real coonskin cap. This would have caused me a great deal of consernation because later, when I was about 10 or so, I saw another Disney movie called Rascal about a boy and his pet raccoon and really wanted a pet raccoon. The boy in the movie was played by Billy Mummy who also played Will Robinson in the television series Lost in Space. I told you television causes a great deal of confusion.

Regardless, by the time I was really old enough to be aware of such things, the Davy Crockett cap was long gone. But we did have a Davy Crockett cookie jar that I still have. 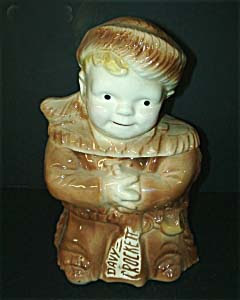 The real Davy Crockett, unlike his Hollywood counterpart, did not go on to become Daniel Boone (who actually lived a bit before Davy Crockett). Davy Crockett was a Tennessee good ol' boy who ended up with a brief career in Congress but failed to get reelected because he opposed President Andrew Jackson's Indian Removal Act (which was the law that allowed the United States government to negotiate with Native Americans and trade them prime farm land for swamps and desert view property).

Davy Crockett became a living myth. Apparently he was a talker and could spin quite the tale. But apparently he could shoot off more than his mouth and was a crack shot with a rifle. For some reason, in 1835 he decided to take part in the Texas revolution from Mexico (I've heard it was kind of a publicity stunt to bolster his waning political career). He died at the Alamo in March 1836 (wearing a foxskin cap).

But Davy Crockett is one of the first media heroes that sprung up around the new frontier that was creeping farther and farther west. In addition to the Disney movies, he was immortalized in umpteen movies about the Alamo and was played by John Wayne and Billy Bob Thornton (which shows you how our standards for what a hero should look like have changed dramatically over the years). God knows who they'll find to play him next. 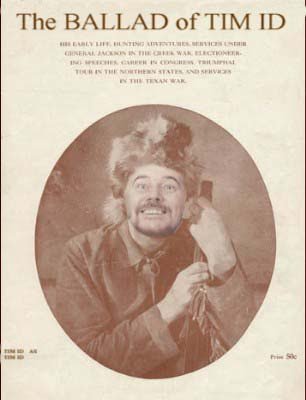 You say you got em confused did ya? I had Davy Crockett, Paul Bunyion, and Johnny Appleseed all rolled up into one character... Grizzly Adams. But then I wasn't very good at recognizing real american heroes from fictional. Hell, I thought "Little House on the Prairie" was a reality show.

Now this takes me back!

I watched all of the Davy Crockett movies serialized on The Wonderful World of Disney while growing up. In fact, the only time I didn't like spending time at my grandparent's house as a kid was on Sunday evenings because that meant the TV was turned to Lawrence Welk rather than Disney (a-1-and-a-2).

The only confusing part about TV for me were laugh tracks. I spent a lot of time trying to figure out how they got all those people in those tiny Love Boat staterooms so they could laugh at the funny parts. Now i just wonder why I thought there were funny parts on the Love Boat. (Come On! I was 8 at the time.)

And lest you think I've digressed, no racoon caps on Love Boat, but there was a Gopher.

Davy Crockett was my hero when i was growing up.... He was only replaced when Dale Evans came along.. i was gonna grow up to be a cow girl.........

see even then i loved ropes...

Shandi, In a sense, I think they were all one character. I'm sure psychologists would tell us something about them being archetypal characters representing the American spirit. Blah, blah, blah, blah...

And are you trying to tell me that "Little House on the Prairie" wasn't a reality show? I just thought Little Joe Cartwright left the ranch, got married and became a farmer.

i ride the bus, Could you imagine watching most of those 70s sitcoms without laugh tracks? No one would have ever known when to laugh. And Gopher ended up in Congress as well, so there is that tie back to Davy Crockett (I feel as though we are playing the Kevin Bacon game).

morningstar, I don't seem to recall Dale Evans tying up Roy Rogers. But then again that could be why he was so happy on those trails all of the time. :)

ooooooh, the photos! laughing too hard....

even at 2 you were center stage...

Andrew Jackson and George Bush were cut from the same cloth. They were Both assholes.

Hayden, Keep in mind it was my brother Dan's Davy Crockett cap. I am sure he made me pay for being center stage. Middle childrend can be pretty vindictive.

THE Michael, Yes, and Charleton Heston played Andrew Jackson in a few movies (I'm not sure if it was before or after being Moses).

Disagree with the michael - Bush and Andrew Jackson have in common that they are assholes, but Bush dodged the draft and sends others to die. At least Jackson fought his own battles, however ingloriously; he wasn't a self-righteous, self-privileged coward.

Hayden, Are you trying to get the last word with THE Michael? :)