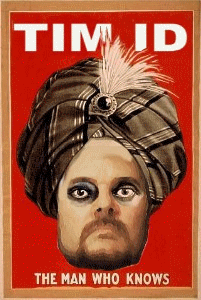 What circus sideshow is complete with out a mindreader, hypnotist or fortune teller? And who at one time or another hasn't wanted to be able to read minds? But upon extended reflection, would you really, truly want to know what people think of you?

I wouldn't. I can hardly stand knowing what I think of myself without being bombarded with other people's uncensored opinions of me. I think it would be a major burden to have to deal with other's thoughts (and I've obviously given this lots of thought).

But being a Pisces, I am pretty much required to at least entertain the thought that, although not a mindreader, I do have some psychic abilities. No, I can't move things with my mind or bend spoons (which I've always thought was kind of a stupid thing to waste your psychic powers on if you do have them). I am, however, pretty intuitive and on many levels an empath. I think that is what being psychic really comes down to -- being more aware of non-verbal clues.

Now I do occasionally play a game of trying to guess which elevator is coming or what suitcase on "Deal or No Deal" has the $10,000 in it that you can win at home. But I seem to have better luck predicting things when I'm not trying to. I definitely don't have luck predicting lottery numbers, winning race horses or the winner of the Super Bowl (but if those refs weren't idiots, I could have said I predicted the latter).

Despite my own minor psychic tendencies, I have a healthy mistrust for people who claim to be psychics, especially for money. For one, if you did have strong enough abilities to predict futures why would you set up shop in the worst part of town in a mobile home with a neon sign that says, "MADAME ZARA'S PSYCHIC READINGS AND HAIR EXTENSIONS." And there is that old joke about wondering why you would need an appointment for a psychic reading. Shouldn't the psychic know you are coming?

I have to admit I did go to a few psychic fairs in my younger days. But I am just too much of a smart ass to sit back and let someone heal my aura for $10. I would keep saying crap like, "I think you missed a spot" or "Do you have anything in blue?" Trust me. Aura healers do not have a sense of humor. More than once I came away with my aura plucked so close to my body that it took months to retain its glow.

Fortunately, I never fell for the 1-800 psychic networks. Okay, I think it is one thing to actually talk to a person in person and get some kind of vibe from them. But I draw the line on anything that involves spiritual direction via a telephone line. I imagine they will one day have these phone trees for psychics: "Press one if you wish to have your palm read, two for a tarot card reading, three to analyze your Astrological chart and four to communicate with the dead. Please note that communicating with the dead requires additional long distance fees."

When it comes down to it, knowing the future is like knowing what people are actually thinking about you. It sounds good until you actually hear it. Because human nature being what it is, most of us wouldn't want the cards we are dealt and would likely look for another psychic who would predict a better future.

But I will end this post with a small but very accurate prediction. Some people will agree with what I've just written, and some won't.

i was more or less raised by a grandmother who was raised believing in the super natural...grandma believed in tea leaf readings and psychics and fortune tellers.. and all that good stuff.. she left her imprint on me..

on my wedding day i had to put a penny in my shoe for good fortune.. HAD TO .. get it??
the penny got lodged in the ball of my foot - gotta love HIGH heels - and stayed there throughout the ceremony and a good part of the reception.. until.. that is.. my whole foot when numb.. stayed numb for 3 days...
which truthfully did foretell my future.. a numb marriage that ended 20 years later.. (i was too numb to end it sooner - cheeky grin)

i don't trust phone tellers or most "pay me" fortune tellers.. but i have had a time or two where someone told me my past and predicted my future and scared the hell out of me.. since then i avoid anyone who tries to tell me what to do........

morningstar - proud she is staying on topic this week!

Morningstar,
I knew you were going to say that (and I'm sure you knew I had to say that).

Cherish,
Thanks. But I think my posts are getting to predictable. :)

When I was taking a Philosophy class in college, we had a "pychic" teach us how to read auras. I was called to the front as my aura was very strong and easy to read for new students of aura reading.

I was wearing pink that day. Apparently my aura was torqouise. I stood there with a shit-eating grin as countless students swore they could see my aura (after staring at me for several minutes).

Then I mentioned to the pychic that torqouise is opposite from pink on the color wheel. Considering that I'm wearing pink, it may be possible that this effect is created when an image is retained on the retina creating it's opposite color when staring for several minutes (like a negative). She got angry.

Didn't she know I would challenge her before she called me up? NO! Cos apparently I look like a sucker.

Anyway, I totally had deja vu' when I told this story.

Shandi, I had a feeling I'd heard it before, too. Very strange. And colorful, too.

I don't mutter. I may pontificate, elicidate, or edify, but I do not mutter. Much.

One thing "physics" love to jump on is coincidence.
I'm getting alot of that with my witchy wife. She hates my analytical nature. I really do try to have an open mind about all this stuff, but it takes a real "slap in the face" kind of occurrence to get me to admit that OK, maybe it wasn't going to happen anyway. Another side effect of being such a skeptic is that I've never been hypnotized. When the voice says I'm getting sleepy, my wide awake mind says, "Oh, really?" So much for using hypnosis as a way to quite smoking.......sigh.

THE Michael,
I was hypnotized by a stage hypnotist once. I haven't smoked since. But then again, I never did.