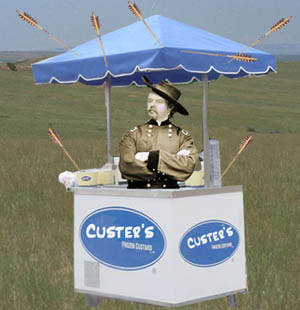 As I reflect upon the wild, wild west, it occurs to me that I was a confused child. Not only did I think that Davy Crockett, Daniel Boone, Wild Bill Hickock and Buffalo Bill were two sets of the same people, I thought General George Armstrong Custer's name was Custard and his last stand was a roadside operation in Montana.

Eventually I figured out that General George Custer was a famous general who died at the Little Bighorn in a battle with the Sioux Indians in what would go down in history as Custer's Last Stand. At the time, Custer was considered a martyr and his defeat became the rallying cry to justify a full blown war on the Sioux. Today, most people have mixed feelings about whether Custer was a hero or a meglomaniac who epitomized the Peter Principle: Everyone rises to their level of incompetence.

I lean towards the latter.

I visited the Bighorn National Battlefield in Montana with my parents when I was about 14 years old. I came away from it with a sense that, judging from one of Custer's buckskin outfits they kept in a glass case there, he was pretty short. And judging from some of the documentaries I've seen on the Discovery and History channels, Custer's Last Stand was more of a last sprint. I saw one program where they used metal detectors to find bullets at the battlesite and were able to trace the course of the battle. Their conclusion was that it was everyman for himself as the men of the 7th Cavalry just ran around randomly trying to find their happy place to get away from the bullets and arrows.

I can't say I blame them. 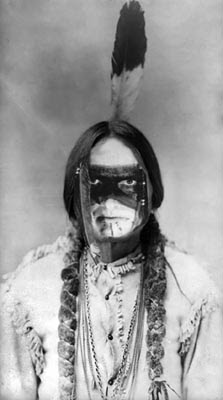 I do think that the Sioux were in the right defending their property and reacting to the atrocities committed by the U.S. Army against their people. However, they were only able to bask in the glow of their victory over Custer for a brief time before the inevitable tide of America swept over them.

And I think it was a sad footnote that Sitting Bull ended up performing in Buffalo Bill's Wild West Show reenacting attacks on the white soldiers. But in the gaudy gaslight of the stage performing before his enemies, he had to pretend over and over again to lose.

History is funny that way.

It's surprising that Custer attained the noteriety that he did after his death considering that he led his force to certain defeat despite receiving intelligence beforehand indicating he was seriously outnumbered. On the other hand, he did have a cool mustache and "little bighorn" is a catchy name for a battle site.

The wild wild west seems to be filled with stories about men. Were they the only heroes? What about Annie Oakley? I would love to see you do a layout on the real heroes of the truly WILD west, the prostitutes. They seemed to be the only woman allowed to have any fun, the dancing, drinking, partying.

btw: Mank has been up to no good. You might want to check on him. He's been peeling layers while you're gone (and I'm not talking about bananas).

Lights, The Sioux name for the Little Bighorn was Greasy Grass. It didn't have the same ring to it. And Custer was part of a long tradition to turn blundering mistakes into heroic achievements.

Shandi,
I had to set the stage of the mythology of the west. Tomorrow I've already got a post planned with a tribute to the real west.

I apologize for Mank, but I'm not my monkey's keeper.

Custer was nothing but an incompetent, pompous, arrogant glory hound whose cluelessness led him and his men to certain death. Imagine his surprise and consternation when these "ignorant savages" came at him like a wave and DARED to fight back against civilized men graced with manifest destiny.

If the Native Americans had only wised up to our ways on the beaches of the Atlantic, they might still be living on the land the Great Spirit gave to them, instead of this polluted, paved over and poisoned cesspool we took from them and performed an "extreme makeover" on.

THE Michael, I'm suprised. I thought you might have an opinion on the subject. :)