Give it a west! 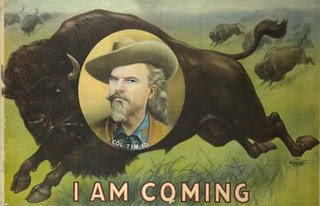 If you haven't figured it out, yet, it's "Wild West Week" at Dizgraceland. What that means (other than an opportunity to put my face on many lengendary characters of the West) I don't really know. As with all of the proceeding theme weeks, I tend to let my mind wander where it will go. The only difference this week is that I will start by pointing it West.

My first observation is about the little quote at the top of the page. "Go West, young man, go West," is almost always attributed to Horace Greeley, editor of the New York Tribune from 1840-1870. Greeley was the founder of the Republican Party (which should endear him to THE Michael). Ironically he was a staunch supporter of the common worker and once employed Karl Marx as a foreign correspondent.

Most sources now credit Terre Haute Express Editor John Soule for using the phrase first in an editorial in 1851. So I've already started out Wild West Week with a bit of disillusionment regarding the statement that kind of fueled the rush west in the first place. Something tells me that Wild West Week is going to be fraught with other such balloon bursting party poopers such as that.

In the process of rooting around my family tree, I did discover that many of my relatives did go west via the station wagon of the 19th century -- the covered wagon. I may be digging up a few of them (just figuratively of course) as we head west and share some of the myth busting stories of my own ancestors.

Anyway, I'll stop for now because I've discovered that five paragraphs is just about the limit of most people's attention spans on the Web (including my own). So hop on and try to keep the saddle-side up and the horse-side down as we ride off into the sunset in search of the wild, wild West (not the television series or really bad movie). Yee....Haaaaaw!
Posted by Time at 6:19 AM

The five paragraph limit is a bit misleading. As you are well aware after dealing with Cervantes the last couple months, five paragraphs could be very long indeed.

Speaking of Cervantes, it wasn't very nice of him to stop in the middle of a battle scene like he did in your latest installment. (For some reason I couldn't post a comment over there).

Good theme. The wild west will no doubt produce gold mine of material.

ummmmmmm do i get to bring ropes??

Lights, Cervantes measures his paragraphs in dog years. I'm trying to keep mine in that palatable level.

morningstar, ropes, spurs, brands, bring it all on. We are going to tie one on during wild west week.

As far as I know, the Republican party was established with the best of intentions. However, any political entity can be hyjacked by extremists and turned into a mere shadow of it's former self. Take the word "liberal". Look it up. Does it really sound as if Lucifer himself coined the word? Our only hope is that some fresh new party gets some credibility and Americans morph back into thinking individuals from the rote sheep they've become.

Five paragraphs, huh? No wonder. Next time let us know if the SIZE of those paragraphs matter.

Somewhere after the civil war and republican and the democratic parties switched hats. Republicans were, as you mention, for the common man and against elite entitlements. They were also the ones, post civil war, making the case that blacks should be allowed to vote.

Republicans still said loudly that blacks were inherantly inferior to whites, they just weren't saying it as stridently and persistantly as the Democrats were at the time. The Democrats were the lynching party.

THE Michael, We all know the road to hell is paved with good intentions. And I randomly chose five paragraphs because I had reached the fifth one.

Hayden, Very interesting. I had heard that the original Republicans weren't anything like today's Republicans (in fact wasn't Lincoln a Republican). It's a good illustration that we shouldn't just base our prejudices on titles.

Oh, i'm gonna love this. My 9 yr. olds thrid grade class has been studying Oklahoma History. Last week they had their own Land Run and we took a day trip to the Oklahoma History Museum. I think that all the adults that went along enjoyed it more than the kids). Hat's off to Tim on a job well done!
Hugs,
~gina~

whew. kicked myself after posting that for being far too serious to appear on your blog. reading history of racism in politics right now so it just burbled out. glad I didn't step over the line.

Gina, That must be a new record for catching up on posts! I'm glad you are enthused about Wild West Week. I can't promise it will be an educational experience, but I hope it's at least engaging. I have to admit,

Hayden, I'm always pleased to have intellectually stimulating comments regardless of how ridiculous my posts are. Consider Dizgraceland a safe environment to share whatever you'd like.