All of my marbles 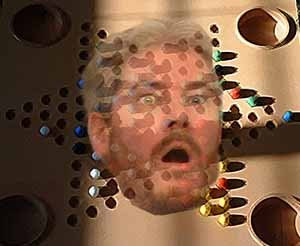 My father taught me how to play Chinese Checkers. He was good in that way in that he would spend time playing board and card games with me. Early on, he would let me win. As I picked up the nuances of the games, I would sometimes let him win.

Chinese Checkers is a mind game. It seems very simple, but it requires that you analyze the board and plan complex moves in advance that can change at the drop of a marble if your opponent moves the wrong marble. Unlike western chess, it is not hierarchial. All of the marbles looke the same. And there are no preprescribed moves that limit what each marble can do.

I don't think linear thinkers do well at Chinese Checkers because nothing moves in a straight line. I feel sorry for linear thinkers. They never seem to know what to do when they encounter an obstacle directly in front of them because it never occurs to them to move backwards or diagonally.

So Chinese Checkers to me is like life. But you really need all of your marbles to play it.
Posted by Time at 10:00 AM

ummmmmm maybe that is why i never much liked Chinese checkers.. or was much good at it........

No-not because i am a linear thinker.. but because i most definitely do NOT have all my marbles.. (or so i have been told)

I lost my marbles long ago!!

You posted one of those certified pre-owned Maytag simile generators, didn't you? Yeah, I thought so.

I learned chess easily at an early age, but never really graduated beyond the beating newbies level, as I can only think maybe 4 moves ahead. Chinese checkers, however, seem too simple for me. I have this habit of preplanning everything (and get accused of being "anal" for taking extra steps in a process in order to simplify the overall operation in the long run) so I suppose that puts checkers right in my comfort zone, because I prefer to think outside the box. I get nothing but grief for seeing the obviously easier method when everybody else sees more work, so in order to implement it, I piss some people (women in particular, since that's the gender I work with mostly) off by taking charge which comes across to them as "bossy", so I suffer in order to grease the skids, which is why I can understand why so many people would rather just charge blindly into shit and suffer the consequences rather than rock the boat. No wonder politics is a no-win concept from the get-go..........

Morningstar,
You are so on topic, it's scary :)

Thanks Cherish, It's nice that you keep looking though :)

THE Michael,I think the trick is being brilliant without other people catching on. I do it all the time and no one suspects I'm a genius.

If you think Chineese Checkers is great you should try GO. It's a very interesting game.

R. I've played GO, but only the computer versions.