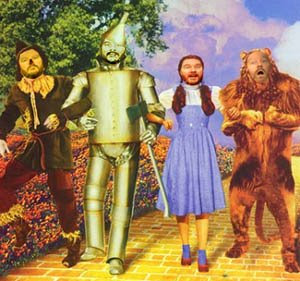 Try as I might, I end up with themes. The damned flying monkeys keep bringing me back to Oz. Ironically Seattle is nicknamed the Emerald City. I remember the contest they held back in the 1980s to name it. It was the city's desperate attempt to get away from being simply known as the Rainy City. Even if you paint spots on a pig, it still oinks.

However, if you actually didn't have a brain, heart, or courage, would you really have the cognitive reasoning capacity, emotional integrity and backbone to actually go out of your way to try to get them (I left out home on purpose because not having a home would definitely motivate you get one)? I don't think so. I have encountered brainless, heartless cowards before and there didn't seem to be anything in their character that would motivate them to seek improvement.

I was never very good in logic class and my brain now hurts.

But at least that is a good sign I have one.

And the courage to say so.

...doesn't that mean you only need what you have?

Anyway, my problem is my brain is fragmented, I often sleep under my bed (women in fishnet stockings scare me) and my heart has been broken, stepped on, run over and pulverized on numerous occasions.

Awesome picture, I like you as Dorothy the best. I think sometimes what we want is not always what we need.

Mickey the Slip! I thought Aussie's were from down under, not over? But I love a paradox. And I prefer to look at a brain as half full, if you sleep under the bed at least you don't have to worry about the boogeyman, and hearts are highly overrated.

Cherish, I really don't have the legs for Dorthy. I think I'm more the Cowardly Lion type.

Who had an album called "I Do Not Want What I Have Not Got"? Was that Sinead O'Connor? If so, how does she fit into all of this? She has no hair--I guess she therefore doesn't want it. But which came first, the not wanting it or the not having it?

Which had "The Emerald City" moniker first? Eugene, Oregon or Seattle, Washington?

Kristy, It was Sinead O'Connor who had an album called, "I do not want what I haven't got." This would imply that every thing she has just appeared without you wanting it, but you wanted it once you had it (except for a photo of the Pope).

I thought Eugene was the City of Hairy Legs, Purple Socks and Birkenstocks. Or was it the City of Ducks?

Wants and needs. Good topic. I've always been pretty good at distinguishing between them. WHich is why I have a TV that is 12 years old now. The damned thing wont die and I can't bring myself to replace something that ain't broken.

Lights, I believe yours is a Sony, big screen television which is a basic need, not a want. Oh, and Lights, I used you as a reference in today's post, you I'm hoping you have my back.

That TV is not mine. Belongs to my housemate. I have a 27" RCA. It still works so I wouldn't replace it yet even if I didn't currently have access to the big sony.

I haven't read the post yet but I agree with anything you happened to say.

Lights, Despite what fantasies you may have concocted about size not being important, it doesn't apply to televisions. Life was never meant to be viewed on a 27" RCA. You must have a credit card that hasn't been maxed out yet. Buy a bigscreen. You can't enjoy what you don't charge.

And thanks for agreeing with me on the other post without reading it. I'm going to go ahead and sign you up for five at full price. Thanks for your generosity.