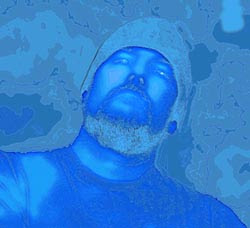 When I was in First Grade, my teacher divided up the class into the Blue Team and the Red Team for a basketball game. I was on the Blue Team. Blue has been my favorite color ever since.

My eyes are blue. My aura is blue. But I wasn't born a blueblood.

I owned a green parakeet when I was 12 years old and I named him Blue (I later bought a blue parakeet and and named him Topper...go figure).

Wallace Stevens, "The Man With the Blue Guitar" is my favorite poem. Even Cowgirls Get the Blues is one of my favorite Tom Robbins books. Rodrigue's Blue Dog's are some of my favorite art (but I don't think I've ever seen a Blue Tick Hound).

"Blue Moon" is one of my favorite Elvis songs (though I listen to it once in a blue moon). "Blue Christmas" is my favorite Christmas song. Blue Hawaii is not my favorite Elvis movie, but it is an okay drink. I've never owned a pair of blue suede shoes, but I think they would be cool. I do have a Velvet Elvis painting done entirely in blue.

The Blue's Brothers were my favorite Saturday Night Live characters. I like Blue Man Group. Blue Velvet was the first David Lynch film I ever saw.

I like bleu cheese and chicken cordon bleu (even though they are spelled wrong). Blueberries are nice with cream. Blue popcicles really do taste blue. I always dye my first Easter egg blue.

I like it when it is hotter than blue blazes. I can sometimes talk a blue streak. And I think of things out of the blue, now and then.

I missed to whole discussion on not forming an opinion. Not sure how I feel about that.

Just a couple more blue references if you don't mind. (I know you don't as that would require taking sides).

You didn't mention Paul Bunyan, the wild blue yonder or Popeye's nemesis Blue-toe. So named, if I'm not mistaken, after an unfortunate incident with a viciously virulent variant of athletes foot which he picked up in Singapore.

Sailors...What are you gonna do?

Anyway, just thought I'd help out a bit.

How about "Blue's Clues"? Blue has never been one of my favorite colors. I have no idea why. I guess it's just generally accepted as a male color. It would be similar to a guy liking the color pink I guess. Although I've gone through most of my adolescense and adult life hating the color pink. It's always been about the colors red, purple and green.

Lights,
I could have continued to come up with blue statements until I was blue in the face, but I rightly assumed others would point out my omissions. I'm leaving "balls" to Mickey. And "Blue-toe"...that was a Blue Lights Special.

Bubbles,
Frothy comment, whipped with just the right amount of foam. I hadn't even thought of the gender connotation when I was writing. I just like blue. But I share your distaste for pink.

Mr Blue... Next your entire blog will be blue. I like blue but purple is my favorite color. Although I love blue cars. I have had many different shades of blue cars. My most favorite one was a midnight blue it was an awesome car. My current car is light blue.

Cherish, I guess I'm going through a color phase. If the truth were to be known, I probably like black a shade more than blue. Purple is nice. I am a winter!

So we're back to theme weeks? Can I put in a request? I'd love to hear your musings regarding Brown. Play nice.

Kristy, I never said it was a theme week. I prefer to remain predictably unpredictable. I just follow the synapse threads wherever they fire. I felt blue, I wrote about blue. It brings out my eye color.

I would write about brown, but I don't have much to say about UPS. But what is that on your nose? :)

Blue is also MY favorite color. Now give it back.

So when is mauve coming up?

THE Michael, According to Shandi we like blue because we are boys. I don't even know what color mauve is. Is it like burnt sienna?