For whom the blog trolls... 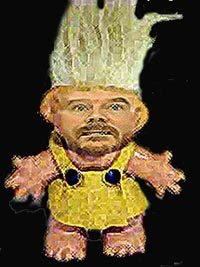 In Internet terminology, a troll is someone who comes into an established community such as an online discussion forum, and posts inflammatory, rude or offensive messages designed to annoy and antagonize the existing members or disrupt the flow of discussion.
--Wikipedia

I have been bothered ever since I read an anonymous couple of comments someone left on a fellow blogger's blog the other day. And I know I shouldn't give trolls any attention because that is what they crave. But the comments were just so mean spirited and cowardly that I was shocked back into reality that, although we feel comfortable in our little blog communities, any twit can do an anonymous hit and run on the Internet Highway and drive off smugly without consequence.

The fellow blogger handled his troll much more graciously than I would. He simply deleted the comments and activated the moderation function of blogger. I'm afraid I would have been tempted to rage at the mindless troll and mock their grammer and spelling (which was pretty infantile). That would have shown them.

I have been lucky so far and haven't seemed to have attract any trolls. Perhaps this is because I tend to blog below the radar and don't allow anonymous comments. I figure if you have something to say, you should be willing to accept what I have to say back to you.

I really can't say I understand the mentality of a troll. It must be the same as an arsonist or vandal who gets off on watching the chaos they've created but isn't wired to accept the consequences. All I can say is that the term "troll" is an apt one. You belong there under the bridge with the rest of the scum.
Posted by Time at 5:44 PM

Wow......that was certainly a gracious observation and much appreciated show of support, Tim. My troll wants to be my groupy, apparently. I've gotten at least 2, perhaps 3 comments from Him/Her, and yes, not having his/her vitriol published did seem to upset him/her. I don't mind so much that this person has observations about me that may or may not be true, even as was so cruely suggested, but I tend to take criticism, constructive or otherwise, only from people I know and respect. And when I rail against the machine (that machine we know so well as DUBYA), I make no attempt to hide my identity, for I am not the least bit afraid to practice whatever freedom of speech and opinion that we have left. Boy, if I can push someone's buttons THIS easily, without even trying, maybe I SHOULD get into the editorial business! hehe

THE Michael,
It's funny how they seem to get obsessed and then angry. Good thing you don't have any pet rabbits to boil on the stove. Keep pushing those buttons, though.

I've had a few trolls. At first I was angry and deleted their comments. They came back because they knew they had pushed my buttons. Then I left their comments in with my defensive remarks. Again, I think they liked the attention. Comment moderation seems to keep both of us on a leash.

I think their motivation is attention and jealousy. My particular troll said, "I'm not one of your cheerleaders". Perhaps these idiots have blogs themselves that get little or negative attention. You'll notice, they never link to their own work. They can't stand up to the criticism.

Here, here, here.... three cheers for Tim! Damn the trolls. i read one of the trolls posts and that was sooo uncalled for. i'm confident the Michael set the troll straight one way or another.
K, caught up on Your posts once again, smiles. ;o)
Hugs,
~gina~

One of the reasons I opened a blog and continue to leave it active even after giving it up is that I didn't think it was fair to post annonymous comments. And I'm pretty nice most of the time. I can only imagine the kind of mentality it takes to find pleasure in that kind of thing.

Way to stick up for a pal there Tim. Well put.

I've always believed in people's right to voice opinions, but the difference between an opinion and an attack blurs when someone shouts out their insults while cowering behind their anominity.

Thanks Gina, And are you caught up with my posts or caught up in my posts? :)

Lights, you are the most prolific non-blogger I know. Let's go find that troll, light a bag of dog doo on their doorstep and run!

I am sure Michael enjoys toying with the poor unfortunate troll.

PS: You make a very cute troll, chuckles!! I may have to take you to bingo with me for good luck.

You're supposed to run after you light the bag? That would explain why I never thought this gag was very fun. Also explains a few ass whoopin's I received.

I thought I looked more like Don King than a troll. :)

That explains a lot.

years and years ago i produced a school play of the 3 Billy Goats Gruff .. the lil guy who played the troll had his own sense of ad libbing.. when he popped out for his first appearance he got stage fright and sang out loud and clear.. "I'm a troll frolly roll".. (definitely wasn't in my script) .. so all this talk about trolls made me see (in my mind's eye) my own lil troll....

sorry Tim the Troll i just couldn't stay on the exact topic......

Morningstar, You may rarely be on topic, but at least you aren't anonymous.