My 30th high school reunion is coming up this summer. It doesn't seem that long ago that I went to the 10 year reunion and discovered that nothing much had changed in the first decade since I'd graduated. Oh sure, lots of my classmates had gotten married and had children. Some had even divorced in that short time. But for the most part, everyone was still young and attached to the personae's they had forged in high school.

Ten years later, I went the first night event of my 20-year reunion and realized I didn't recognize anyone (even the ones I sort of knew in high school). I did notice there were a lot less attendees, a lot less hair, a lot more bellies and a lot more water under the bridge. But after awhile, I began to pick up the same vibes I'd felt in high school. The popular people were clustered in groups and the fringe people were on the fringes beginning to feel inadequate in the same way they'd felt in high school. I left quickly and blew off the rest of the reunion activities.

So last week, I received an e-mail telling me about the 30th high school reunion and directing me to a Web site for it. I surfed through it and was startled to see a photo of me from the 20th year reunion. Someone from my class mentioned they'd seen the photo and it appeared that I had "aged well."

Aged well? And that photo was taken 10 years ago. What would they think now? I'm well-preserved? Wines are aged well. Mummies are well preserved. Sigh. 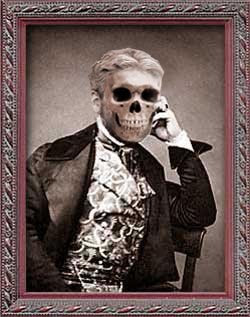 Wouldn't it be nice to have one of those portraits like in Oscar Wilde's Portrait of Dorian Grey that aged for you? Ironically, it's just the opposite. Our portraits remain young while we age and remind us that, although we don't feel any different, we definitely look different. 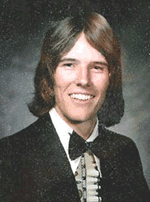 I think I'll skip my 30th reunion and send an old photo instead.
Posted by Time at 12:30 PM

Since my highschool is way up north in Fairbanks, attending a highschool reunion has never been much of an option for me. I would like to show up now, though, because I'm convinced I've aged better than ANY of them, although I would have to fudge just how well I've done since then.
However, I really don't want to see what those chicks I lusted after evolved into since then....it would totally ruin the fantasies I've had about them since.

THE Michael, As with good wines, even if you age well, eventually you need to be uncorked or you turn to vinegar (I'm not sure what the means, but it sounded kind of profound).

And nothing ruins a good fantasy more than fulfilling it, so you are better off not going to a reunion.

I feel as though I'm going through my fortune cookie stage.

Fantastic pictures!! WOW Very handsome in highschool a total hottie and even more handsome now! I have not attended one of my reunions. The past is the past and I have no desire to revisit it.

Thanks Cherish. You must still have a fever. :)

I considered going to my 20th, but when I reviewed the materials they sent I realized that all of the people I wanted to see again were on the "address unknown" list.

I've never been to one. Maybe I should break down and go for the 40th. God that sounds awfully old, LOL!

Thanks Hayden, I think there is an epidemic! :)
And I don't think it sounds old. High school just seems another world away.

I'm pretty sure I'm on the "address unknown" list. I haven't seen anyone from high school in over 20 years. Hell, I can barely remember any of them.

Lights, Come on, you were the quarterback of the football team and student body president. Don't give me this "address unknown" crap.

now as for your blog Tim.. i loved the last pic......Your talents with photowhatever really do impress!!!

And all this talk about aging got me to thinking... haven't we all aged the exact same amount?? what is all the fuss about??? ok i will admit it.. i was / am and will always be blonde!!! cheeky grin

Morningstar, I consider it wise people who have moved far away from high school, physically and mentally. I'm glad you liked the photo. It was kind of a fun thing to watch myself morph into myself.

And a thought provoking question like don't we all age exactly the same amount really deserves a post of its own.

Getting in on this late. I got an email recently informing me that my graduating class is planning a 20 year reunion next summer (we didn't have a 10).

At first I was excited to think that I could meet up with everyone again. Considering that I'm no longer shy, I could have so much more to talk to them about... maybe could impress them... maybe could fit in.

I looked at the bulletin board regarding the reunion and saw approximately 5 people discussing the plans. I knew all 5 people. They were the popular crowd. Just seeing their names in print again gave me the heebeejeebies. I was immediately nervous.

I decided not to go. Just as you said Tim, they will only be interested in their same old crowd. Even if they're all drug-addicted losers living on welfare, they will still be the most impressive, most powerful people at the reunion.

These people will always have this effect on me. They immediately reduce me to a groveling, pathetic scaredy-cat. They were the first people with power when power became important.

Shandi, I've been waiting for you to comment so I can move on and write a new entry :)

I do think it is funny that the people with the best memories of high school are the ones who made the rest of us miserable. Perhaps if someone would stage an alternative reunion, in my case of the band and drill team, maybe the rest of us would attend.

Hell, let's just hold a national high school re-union for all of us who for one reason or another were invisible or terrorized during that formative period of our lives. We could hire the Hell's Angels Biker gang for security, and pick maybe five of the worst bullies and "Heathers" to attend, with a VERY special tribute to them, a tribute which will haunt them for the rest of their miserable lives.....hehe.....me so bad.....